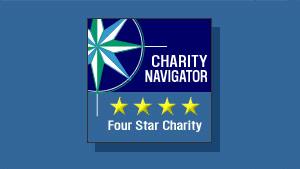 (Madison, WI) – For the third consecutive year, InterVarsity Christian Fellowship/USA has received a 4-star rating from Charity Navigator, the highest rating that is given. Charity Navigator is America's largest and most-utilized independent evaluator of charities.

The 4-star rating recognizes InterVarsity’s sound fiscal management, and its commitment to accountability and transparency. In a letter to InterVarsity, Charity Navigator president Ken Hill noted, “Only 10% of the charities we rate have received at least three consecutive 4-star evaluations, indicating that InterVarsity Christian Fellowship/USA outperforms most other charities in America.”

“By God’s grace, InterVarsity’s donors provide the financial platform that enables our campus ministry,” said InterVarsity president Alec Hill. “We are committed to maintaining the highest standards in order to be accountable to our ministry partners, in thanks and appreciation for their support of our work on U.S. college and university campuses.”

Charity Navigator reviews 17 governance and ethical practices as well as measures of openness, providing information on its web site for each of the charities it evaluates.  These metrics reveal which charities have “best practices,” which include sharing basic information about their organization with their donors and other stakeholders.

InterVarsity Christian Fellowship/USA is a campus ministry which has worked with students and faculty on U.S. college and university campuses for more than 72 years. InterVarsity has more than 900 chapters active on 590 campuses, from Ivy League universities to community colleges. InterVarsity is a charter member of the Evangelical Council for Financial Accountability(ECFA). The Financial Information page on our website has more on InterVarsity’s finances.