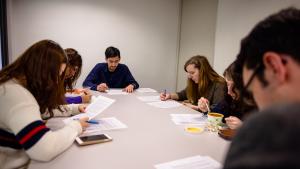 (Madison, WI) — InterVarsity Christian Fellowship today led a group of Christian ministries to urge the Trump administration to forgo a rule that could force international college students to leave the U.S. this Fall if they only take distance learning online courses. Immigration and Customs Enforcement announced on Monday, July 6 that international students who attend college in the United States on visas will be barred from staying if their school's classes are entirely online. Many colleges and universities across America are switching to distance learning in an attempt to curb the spread of COVID-19.

The full letter is below:

We write to you in regard to Immigration and Customs Enforcement’s temporary final rule, announced on July 6, which would require international students attending colleges and universities which are meeting only online in the Fall to leave the country or to transfer their enrollment to another institution. This student visa decision is unnecessary, lacks compassion, and falls short of American ideals. We call on Acting Secretary of the Department of Homeland Security Chad Wolf to reverse this decision and we ask fellow Christians to pray and to express their concern to their Congressional representatives.

We are a broad coalition of student ministries who seek to welcome, serve, and love international students and scholars; Christian institutions of higher education; churches; and other ministries. We believe the proposed temporary student visa rule violates tenets of our faith to “not mistreat the foreigner” (Lev. 19:33) but to love these neighbors as ourselves (Lev. 19:34, Matt. 22:39).

The modification to the temporary exemptions breaks an implicit promise made to these students. The United States issued them student visas, which traditionally allow students to complete their degree programs. In reliance on those visas, they made significant financial and relational sacrifices to come to the United States to study. While here, they have paid their tuition, secured housing, progressed in their studies, and contributed positively to their campus’s experience. Through no fault of their own, their universities and colleges have moved exclusively to on-line courses this Fall to restrain the spread of COVID-19. International students should not be expelled from the country or forced to change institutions because of a change driven by current public health needs.

While health and security concerns rightly factor into visa decisions, there are no new health or security reasons to justify this proposed student visa rule. These students were vetted and legally admitted to the United States to continue their studies, many who have been here for years at college. They arrived before the pandemic began, and they carry the health insurance required by their institutions. We recognize that student visas traditionally are not given for online-only degree programs. However, students who were admitted to in-person degree programs before the pandemic should not be penalized because of a temporary change of their institution’s pedagogy.

This proposed student visa rule also exposes students to significant costs and risks. If they try to stay, they face significant educational disruption if they transfer to another institution, as well as the financial and relational disruption of moving to an unfamiliar community. If they cannot stay, they face significant costs and the difficulty of returning to countries whose borders may be closed to people from the United States.

The proposed student visa modification also robs our country of the significant contribution these international students make. American students benefit from exposure to global perspectives and friendships. American universities benefit from their scholarship and from their tuition revenue. Most international students pay full tuition and do not receive financial aid. Some studies indicate that our U.S. public universities generate nearly 30% of their yearly tuition revenue from international students despite the fact that foreign students only constitute about 10% to 15% of the student population. When allowed to participate in Optional Practical Training internships as college graduates, these students contribute their expertise and insights to American companies. When they return to their home countries, many serve as unofficial goodwill ambassadors for our nation as they bring back a network of relationships and experiences of their time in our country.

International students who have already arrived in the United States and who are enrolled in degree programs should be allowed to complete their courses of study in this country without further disruption. This is reasonable, compassionate, and consistent with our national interests.

For a downloadable version of this letter, click here.

InterVarsity Christian Fellowship is a college ministry that has 1,119 student and faculty chapters on 772 campuses across the US, from the Ivy League to community colleges. InterVarsity serves and ministers to students in a variety of ways, including planting chapters that reach every corner of campus, mobilizing students for cross-cultural missions, serving the larger Christian Church through producing resources for thoughtful discipleship and award-winning books and videos through its publishing arm, InterVarsity Press.