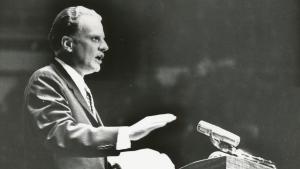 Billy Graham partnered with InterVarsity Christian Fellowship many times during his life in order to bring the gospel message to college students.

“What a wonderful joy it is to go to a city and hold a crusade in which there are university students engaged in InterVarsity, who are winning people to Christ, and who believe in the gospel of our Lord Jesus Christ,” Graham said at Urbana 57. At each Urbana he challenged the attendees to make a commitment to follow Jesus Christ for the rest of their lives.

“He has left an unforgettable legacy with generations of Urbana students, tens of thousands who have been mobilized long-term around the world because of Dr. Graham’s challenge to give their lives to God’s global mission,” said Tom Lin, InterVarsity’s president.

Former president Alec Hill said that students appreciated Billy Graham’s commitment to integrity in ministry and responded to his challenge to devote their lives to a worthwhile cause. “He will be remembered as a humble, faithful follower of Jesus Christ,” Hill said. “His personal influence, which was considerable, is totally related to his desire to share the gospel message with as many people as possible.”

At more than one Urbana, Graham quoted a six-word phrase written in the Bible of William Borden, an heir to the Borden milk fortune who died in Egypt on his way to the mission field. “There are a thousand things you can do with your life; a thousand ways you can spend it,” he said at Urbana 87. “But how many of them will enable you to say at the end of your life, ‘no reserves, no retreat, no regrets’?”

Hundreds, probably thousands, can look back on their encounter with Billy Graham at Urbana and reflect on how that one meeting changed their lives—people such as Ken Anderson and Linda Kroeger. At one Urbana conference, a medical student in the audience may have saved Billy Graham's life by diagnosing a blood clot from Dr. Graham’s on-stage discomfort.

At a news conference at Urbana 87, Graham said, “I do not know any organization in the world that so motivates students and young people to become missionaries throughout the world [as InterVarsity]. I meet them wherever I go in the world. They’re scattered to almost all the countries of the world and they come up to me and they tell me ‘I heard you, I saw you at Urbana.’ You feel like you’re already in a family because something happens here that makes us a family even though we belong to different organizations.”

Lin observed that Dr. Graham’s commitment to mobilizing students was unwavering. “We are honored to have his name so closely associated with ours—it’s often what people think of when they think about Urbana,” he said.

Graham also held evangelistic meetings on college campuses: at the University of Minnesota during InterVarsity’s “Year of Evangelism” in 1950-1951, and a four-day mission at Yale University in 1957. He spoke to over 31,000 people during a weeklong series of meetings at the University of North Carolina at Chapel Hill in September of 1982.

After Billy Graham’s 1957 crusade in New York City, InterVarsity staff were charged with the responsibility of following up with the 1,700 college students who committed to follow Christ during those meetings. One of those who came to faith at the 1957 crusade was Ned Hale, who described his journey to faith in this way:

When I first heard Billy Graham at a “campus mission” at Yale University in 1957, I believed in God but not that I was a sinner. I was upright morally and even working my way through school. After four months of struggling unsuccessfully to prove that I was not a sinner (to myself if not to others), I was ready to hear Graham again at his Madison Square Garden crusade. The Holy Spirit convinced me not only of my sin but also that Jesus was alive, and equally incredibly that he loves me!

Ned became an InterVarsity student at Yale, and then joined InterVarsity staff after graduation. He held a number of leadership positions over a long career in campus ministry. Today, as a retiree, he volunteers as InterVarsity’s archivist.

Speaking at Urbana 57, Graham may have foreshadowed the student activism of the sixties by telling students they had the power to change the world. “You cannot wait upon the faculty,” he said. “You cannot wait upon older leaders. It is time for students to exert their leadership with all of their enthusiasm and the tremendous power that they have. Give it all to Christ.”

Speaking at Urbana 64, Graham said: “God has given us an open door and given us the tools and technology to touch the whole world in the next decade—if you and I mean business, if we are faithful.”

Billy Graham was faithful to the end; his life was dedicated to his Savior and Lord. For many students who heard him at Urbana and on the other campuses where he spoke, he modeled a life of total commitment to the gospel: “no reserves, no retreat, no regrets.” 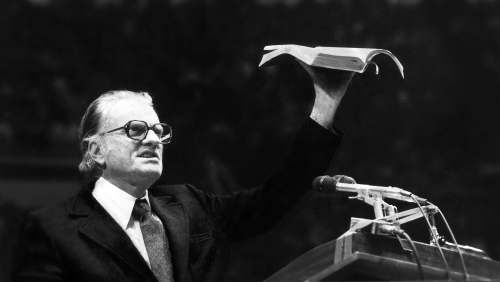