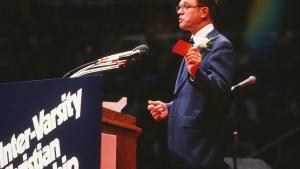 “InterVarsity owes a great debt to Dave and to his leadership in missions,” said InterVarsity President and CEO Tom Lin. “[He kept] us focused globally and on the importance of mobilizing students to share the gospel around the world. His legacy includes hundreds of thousands of college students who had their lives transformed and received God’s calling to global missions through an Urbana Student Missions Conference. InterVarsity is forever grateful.”

A Legacy of Global Missions Begins

David attended the very first Urbana in 1946 with his good friend, Wheaton College roommate, and future brother-in-law, the missionary/martyr Jim Elliot. David attended, spoke at, or directed nearly every Urbana for the next five decades. For his entire life, he kept his signed World Evangelism Decision card from Urbana 46. (Urbana participants use these cards to mark their commitment to God’s global mission.)

After graduating from Wheaton College in 1949, C. Stacey Woods (InterVarsity’s first president) recruited David to InterVarsity staff for a year as an appointed ‘missionary staff member,’ visiting 120 campuses across the U.S. and Canada to challenge students to give their lives to missions. He then served Northwestern University as a part-time campus minister while attending graduate school at Wheaton and preparing for the mission field.

“My years with InterVarsity were a very significant part of my life,” he said in a 2006 interview with InterVarsity. “They were a time when God taught me many things and gave me many opportunities. I didn’t know much about missions in those days, except what I’d learned second or thirdhand. But I learned to trust God, and not myself, for any results.”

After 15 years as a missionary in Colombia, God stirred David’s heart again about calling and equipping college students to give their lives to God’s global mission. The stirring, David remembered, was gradual — John Alexander, InterVarsity’s President at the time, offered him the job of Missions Director three times before David accepted!

During his tenure as Urbana Director (Urbana 73 and 76; he also served as Assistant Director of Urbana 51 and 70) attendance grew from 12,000 to 18,000 students, and commitments to missions grew from 8 percent to nearly 50 percent. He also helped design a summer follow-up program for those commitments that eventually grew into the Perspectives Program, which is a cornerstone of missions training in churches, seminaries, and InterVarsity chapters to this day.

David also helped steer Urbana through the turbulent 1970s, a time when social unrest, campus violence, and the Vietnam War all pushed national anxiety to the brink. Leighton Ford, a leader in both the Lausanne Movement and the Billy Graham Evangelistic Association — as well as a lifelong friend of David’s — remembered David’s example at Urbana 70. Leighton had been asked to deliver the keynote evangelistic message at a time when those tensions at the conference were especially high.

“That message was one of the most difficult of my life. I labored in prayer and heart searching as I prepared … [and] I felt little peace as I spoke,” he said. “But I knew that David was nearby, praying, standing by me, encouraging me.

“His fortitude, his steady calm in a testing time, left a lasting impression of Christlike grace and strength. His ability to listen and discern, his concern for helping others to flourish, his ongoing passion to know Christ and make him known — these traits always come to mind when I think of David Howard. I am grateful to have known and served with him.”

In that same 2006 interview, David reflected on the impact of Urbana for global missions: “I’ve been to probably 80 countries, and almost everywhere I go, invariably I run into people who tell me they’re serving today on the mission field because God used Urbana to call them.”

“David’s friendship was such a blessing to me,” said Tom Lin. “When I began as Urbana Director, he told me, ‘I will be praying for you every day.’ And that’s exactly what he did. Over those five years, in the most difficult days of leadership, I was always encouraged to know that each day David was praying for me.

“I’m deeply saddened and grieving Dave’s passing. Many throughout the missions world will miss Dave and celebrate him — in many ways he was a ‘giant’ in global missions. But I, most of all, will miss his smile, his joy, and his passion for students and for Christ.”