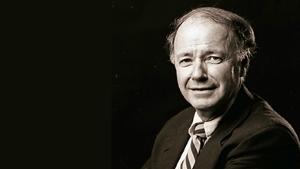 Tom Dunkerton was a member of the Board of InterVarsity during a difficult transitional period, and stepped in to become interim President in June 1987. He had just retired as Senior Vice President of the Saatchi and Saatchi Compton advertising agency in New York City and was available to devote his full attention to InterVarsity. He was succeeded by Steve Hayner in the spring of 1988.

Tom met InterVarsity founder Stacey Woods as a child, when Stacey visited his home, and he worked with Jane Hollingsworth to plant a chapter as a student at New York University in 1946. He became actively involved in InterVarsity as a volunteer and mentor several decades later at the invitation of then Regional Director Janet Luhrs Balajthy. He is remembered as a champion of women in InterVarsity ministry.

“Tom had a deep faith in God and a strong commitment to service,” Janet said. “He had a soft and generous heart.” He also appointed Samuel Barkat as InterVarsity’s first Vice President and director of Multiethnic Ministries.

InterVarsity endured a series of difficult leadership transitions in the 1980s. Jim Lundgren, who was a mid-level leader at the time, said of Tom, “It felt like a dark hour when he stepped in with Barney Ford and Bob Fryling to pull us out of the mire. Thinking back on it now, I see how much we needed his frank and humorous style to get us on track and moving. It is great to remember him with thankfulness this Easter weekend.”

Bob Fryling, who was directing InterVarsity’s campus ministry at the time, said, “Tom was a New York marketing executive without guile. He was a faithful and generous man who loved the Lord and InterVarsity and was an outstanding crisis president."

InterVarsity was in a precarious position in 1987 (as reported in chapter 15 of For Christ and the University, “Revolving Door Leadership”). Our future looked tenuous but Tom quickly stepped in to offer bold, decisive, and good-humored leadership. He is fondly remembered by the staff and leaders of that era.

After his passing on Easter weekend, a short graveside service was held on Tuesday, April 3 at Mt. Paran Baptist Church, Vesuvius, Virginia. A memorial service and celebration of Tom’s life was held April 28, 2018, at Trinity Presbyterian Church in Charlottesville.