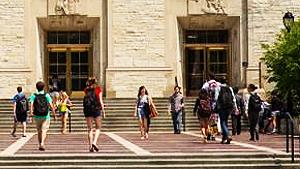 (Madison, WI) -- InterVarsity Christian Fellowship/USA, which has over 1,000 student-led chapters on campuses across the U.S., has joined with other Christian campus ministry organizations in a statement denouncing attacks on Muslim student organizations and students and committing to speaking out against future attacks.

“The First Amendment’s guarantee of religious liberty includes all religious individuals and campus organizations,” the statement says. “Every group should be able to exist on campus and express their religious faith without fear.”

“We denounce the increase in on-campus attacks against Muslim students and campus organizations,” said Greg Jao, InterVarsity’s vice president for campus engagement. “As Christian campus ministries, we believe Jesus calls us to love our neighbors as ourselves. In the same way we would stand with a student organization being targeted because of its Christian faith commitments, we are committed to speaking out when Muslim student organizations are being targeted because of their faith.

InterVarsity believes loving our neighbor on campus includes respectfully engaging in inter-religious dialogue to support greater understanding, such as a recent event InterVarsity co-sponsored at McDaniel College in Maryland, while still retaining the distinctives of our Christian faith. InterVarsity students at Ohio State University also responded with a message of hope and healing that was embraced by some Muslim students, after a recent attack on campus and InterVarsity students at Baruch College have engaged in inter-faith dialogue with Muslim, Jewish, and Hindu student groups. At Pierce College, InterVarsity students help maintain a prayer room that is open to all faiths.

Jesus commands us to love our neighbors as ourselves (Matthew 22:37-39).

Our commitment to religious liberty requires us to speak out when religious people or groups are targeted because of their beliefs or practices, whether by the government or by other Americans. The First Amendment’s guarantee of religious liberty includes all religious individuals and campus organizations.

We long for campus environments where religious students and groups are respected and protected as valued members of a diverse campus community.

When any of us experience acts of religiously-motivated threats, discrimination, or exclusion, as Muslim campus communities currently face, we will speak out. Every group should be able to exist on campus and express their religious faith without fear.