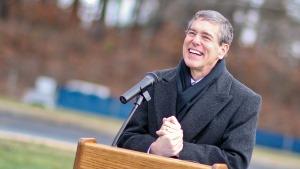 WESTMONT, ILLINOIS—Steve Hayner was healthy and fit and serving as president of Columbia Seminary when he found out he had pancreatic cancer. He and his wife, Sharol, embarked on a journey together with their children that soon included tens of thousands of visits from friends and acquaintances via CaringBridge. The overwhelming response to their posts on this website attested to the surprising and engaging way that they chose to live in the face of death. In July 2015 InterVarsity Press will be releasing a compilation of those posts in the book Joy in the Journey: Finding Abundance in the Shadow of Death by Steve and Sharol Hayner.

Steve was always known for signing letters and emails, “Joyfully, Steve.” These pages, including reflections from some of those closest to Steve and Sharol, will offer a glimpse into what it means to walk in honesty, with joy, even through great pain. “On the journey of life, we need scouts ahead of us who send back guidance and encouragement,” Sharol said. “As scouts in the valley of the shadow of death, I hope that our discovery of God’s faithfulness, presence and gift of joy especially on the darkest days will bring courage and the desire to trust Jesus in life and in death.”

Steve was the president emeritus of Columbia Theological Seminary and an ordained minister of the Presbyterian Church (U.S.A.), as well as a professor, author and the former president of InterVarsity Christian Fellowship. He held a PhD in Hebrew and Semitic Studies from the University of St. Andrews in Scotland. He served on the boards of World Vision and International Justice Mission, among others. Known by many throughout the world, Steve’s passion was to prepare women and men to lead congregations toward the fulfillment of God’s call as churches who are biblically faithful and growing steadily in their love for God, their love for each other and their love for Christ’s work in the world.

“Steve Hayner has been first a hero and then a friend since I met him many years ago,” said John Ortberg, senior pastor of Menlo Park Presbyterian Church. “He was a people magnet and an idea machine and an energy force. To follow the journey that he and Sharol traveled together through the valley of the shadow of death was a privilege and a heartbreak and an education in hope. I’m grateful their searing, aching, honest, inspiring words are now permanently available. I cannot imagine a human being who would not benefit from it.”

Sharol has been serving in ministry for over forty years with her husband, Steve. She served as children’s music director at University Presbyterian Church in Seattle and as children’s music director and worship coordinator at Christ Presbyterian Church in Madison, Wisconsin. At age forty-eight she began seminary, and ultimately graduated from Columbia Theological Seminary in Decatur, Georgia. Ordained in the PCUSA, she served as associate pastor for discipleship at Peachtree Presbyterian Church and now serves as parish associate at Kairos Church, both in Atlanta. She has three children and five grandchildren.

“I worked at InterVarsity Press during Steve Hayner’s tenure and saw the lasting impact he had on our organizational culture,” said Cindy Bunch, editorial director for IVP Books. “It has been a privilege to work on this book project with Sharol, so filled with both beauty and pain. They are both, for me, mentors in the way of life and death.”

Joy in the Journey will include forewords by Steve’s close friends, Mark Labberton, president of Fuller Seminary in Pasadena, California, and Alex Gee, pastor of Fountain of Life Family Worship Center and president and founder of faith-based Nehemiah Community Development Corporation, both in Madison, Wisconsin.

“Seldom have I been as moved as in reading these epistles from Steve and Sharol Hayner ending ‘Joyfully yours,’” said Leighton Ford. “Through his life Steve helped so many to find life in all its fullness in Christ. Now, with his beloved Sharol, he guides us through the ending of life in fullness of hope. Thanks to InterVarsity Press for what I believe will become a classic.”

Founded in 1947 as an extension of InterVarsity Christian Fellowship/USA, InterVarsity Press serves those in the university, the church and the world by publishing thoughtful Christian books that equip and encourage people to follow Jesus as Savior and Lord in all of life. For more information, visit ivpress.com.