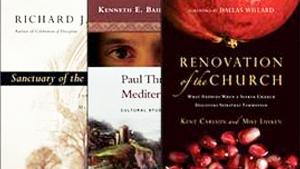 Westmont, IL-InterVarsity Press was honored in both the 2012 Christianity Today Book Awards and Leadership Journal's Golden Canons for its publishing contributions to the mission of the church and the life of the leader. InterVarsity Press (IVP) received six awards in five categories; winners were announced in the January issue of each publication.

Renovation of the Church (IVP Books/Formatio) by Mike Lueken and Kent Carlson was honored twice, winning the Christianity Today award for The Church/Pastoral Leadership category and the Golden Canon for the Leader's Outer Life category. “Carlson and Lueken describe with authenticity and courage their church's journey from a 'seeker sensitive' emphasis to one of 'faith formation,'” said one Christianity Today judge. “What's extraordinary about this is how the church grew smaller, not larger, but in the process became more faithful and more grounded.”

Richard Foster's Sanctuary of the Soul (IVP Books/Formatio) won the Golden Canon for the Leader's Inner Life, an indication that Foster's journey into meditative prayer is speaking a much-needed word of stillness into the lives of many of today's leaders. In a recent Books & Culture review, Jason Byassee calls it the “perfect book” to teach evangelicals about biblical meditation. “Not a sentence is misplaced,” says Byassee. “Each drives you to the next with the expectation that good things will be waiting.”

“InterVarsity Press is honored to receive these awards, as they reflect our commitment to publish significant books on Christian witness, on understanding the Scriptures, and on equipping pastors and other church leaders in their ministry,” said Bob Fryling, InterVarsity Press publisher. “We congratulate all of our authors and are grateful for the public recognition of these books.”

Founded in 1947 as an extension of InterVarsity Christian Fellowship/USA, InterVarsity Press serves those in the university, the church and the world by publishing thoughtful Christian books that equip and encourage people to follow Jesus as Savior and Lord in all of life.