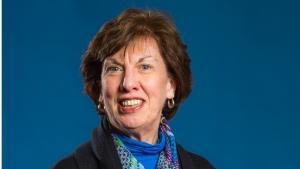 Janet began her career with InterVarsity planting campus chapters on Long Island in 1975, and she became InterVarsity’s first female regional director, overseeing the work in New York/New Jersey for seven years. She served as the national field director for the Northeast for 13 years before becoming the associate director of Collegiate Ministries. Janet also presides over InterVarsity’s Women’s Council.

Janet holds graduate degrees in counseling from Hofstra University and in biblical studies from Wheaton College Graduate School. She and her husband live in Rochester, New York, and have two grown children.

“Janet brings a wealth of insight and experience from her decades ministering among students and faculty,” said president Jim Lundgren. “She has been invaluable to the movement as associate director of Collegiate Ministries, and InterVarsity is blessed to have someone so well prepared for this role.” Janet will continue to reside in Rochester, and will begin her new role on June 22.

Janet’s appointment was one of the first decisions announced by Jim, after becoming president of InterVarsity. Jim was appointed interim president by InterVarsity’s board of trustees following the announcement by former president Alec Hill that he was stepping down, due to a diagnosis of bone marrow cancer.