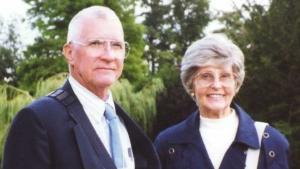 Ray and Doris Rollins are not saints. In separate interviews they both said that we could tell their story as long as we don’t make them look saintly. So let’s get that out of the way right at the start.

Ray and Doris met each other, and InterVarsity, in the late 1940s as college students in upstate New York, Ray at Rensselaer Polytechnic Institute and Doris at New York State College for Teachers (now SUNY Albany). Ray had grown up in a conservative Baptist family, but after serving in the U.S. Army during World War II, he was far from the faith. Doris had grown up in a liberal Baptist family and had never heard a salvation message.

For Ray, finding a faith through InterVarsity that was not as stifling as what he had experienced during his childhood was refreshing. “I was able to discover a whole new kind of Christianity,” he said. Doris heard InterVarsity founder Stacey Woods speak on the Christian faith at InterVarsity’s fall retreat. “I felt convicted that it was something true and worth basing my life on,” she said.

Ray attended InterVarsity’s first missions conference in Toronto in 1946, and then together Doris and Ray went to the next conference, the first one in Urbana, Illinois, in 1948. Their experiences in the campus fellowship, as early subscribers to InterVarsity’s HIS magazine, and as avid InterVarsity Press book readers, shaped their Christian faith. “We both owe a lot to InterVarsity,” Ray said. Their longest friendships were with people they met in college through InterVarsity, and meeting other InterVarsity alumni at church provided an immediate bond of friendship.

Ray taught electrical engineering at SUNY Buffalo for several years, and served as the InterVarsity chapter’s faculty sponsor. Later, when they lived in Washington, D.C., they were part of a group of alumni who met regularly with local InterVarsity staff to receive updates and support the ministry.

For the last 14 years they have lived in a retirement community in Solomons, Maryland, on the Chesapeake Bay. When they discovered a small Christian fellowship group at nearby St. Mary’s College of Maryland, they helped the fellowship connect with InterVarsity. “Once they got affiliated with InterVarsity, there was a lot more stability from year to year,” Doris said.

Ray and Doris have also hosted periodic coffee gatherings in their home to raise support among local residents for the St. Mary’s college ministry. Esrael Seyum has been working at St. Mary’s College for four years and has been greatly encouraged by the support of Ray and Doris and others. He’s now assistant area director and working to bring InterVarsity chapters to neighboring campuses.

InterVarsity’s campus ministry has had a lifelong impact on Ray and Doris and their family. Their children connected with InterVarsity through college and most recently a granddaughter was part of the InterVarsity chapter at Caltech. She worked for a summer at InterVarsity’s Campus by the Sea on Catalina Island.

It’s not just their children who were influenced, but also Doris’s father. He was not much of a churchgoer but just before he died Doris discovered that he had made regular contributions to InterVarsity for more than 40 years. She suspected that his contributions were made in response to the impact he had seen InterVarsity’s ministry make in the lives of his two daughters and their friends.

Doris remembered that when her father came to campus for her graduation and discovered that his car wouldn’t start, two InterVarsity guys from Rensselaer helped him. “[They] took off their coats and crawled under the car, and within an hour had it working,” she said.

So maybe InterVarsity’s ministry doesn’t make saints out of people. But it does change lives. Ray and Doris’s commitment to campus ministry has never wavered through the years, knowing the challenges college students face. “It’s awfully hard to persuade Christian students that when they go to college they need to grow spiritually as well as intellectually,” Ray said. “InterVarsity provides that opportunity.”