Listening, Learning, and Growing at Rutgers 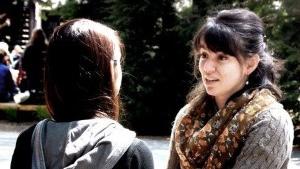 Glorianne Wright was sitting in the back row of the auditorium on the last night of Chapter Camp when she felt her heart beating uncontrollably. Students and staff had spent a week in Bible study, planning programs and working on ideas for the coming school year. Prayers had been prayed to commission people and projects. The camp director was getting ready to close the meeting. All of a sudden Glorianne stood up and yelled, “Wait!”

She had just served the first of her two years as president of the InterVarsity chapter at Drew University. All week long at camp she had been talking with newly appointed staff members and had gained a new appreciation of their role.

Glorianne ran to the stage, grabbed the microphone, and asked for more time to pray.

“I shared what a gift and what a value the staff are to the ministry that we do,” she recalled. “On my campus we didn’t have a staff worker to help us. I said, ‘Staff, we want to honor you, and we want to pray for you and what you need to do this summer so that you stay on campus, loving us the way God has called you to.’”

That night Glorianne realized that she might be called to campus ministry herself. Just a few months earlier she had attended Urbana 03, and discovered that ministry was more than just being a pastor of a church or a missionary in a foreign land.

Glorianne did join InterVarsity staff and was assigned to Rutgers University, the largest higher education institution in New Jersey. Over the past ten years she has seen steady growth in InterVarsity’s ministry on campus, as well as growth in her faith and in her leadership development. Currently about 200 students are involved in the two Rutgers chapters.

One of her most challenging experiences during her ten years on staff has been coming to terms with her identity as a biracial Latina woman. Her Puerto Rican mother had downplayed her ethnicity when Glorianne was growing up, and she had never connected with other Latino students in school. On staff she tended to avoid conversations about ethnicity, at least until she was invited to InterVarsity's LaFe 2010 student conference.

“I went with my arms crossed,” she said. “I was quite upset.” But she spent a lot of time talking with fellow staff member Steve Tamayo. Assigned as Steve’s assistant, she was with him almost continuously during the conference. Steve, also a biracial Latino, looks very White but embraces his Cuban heritage. At the end of the week she felt God asking her, “Who do I say that you are?”

Realizing that she didn’t have to measure up to other people’s definitions of being a Latino, she found herself freed to accept herself as God had made her.

“That became very informative to my faith, to my identity, and to my leadership to my students,” she said. “Now I think about the importance of them understanding who they are and how God made them, in their ethnic and cultural identities as well as in their personalities and their giftings. And once we understand that, we can engage cross-culturally.”

She is one of four InterVarsity staff participating in the LaFe Pilot Project in Evangelism. Two California staff serve as project mentors, and have given Glorianne and the others tools to help small groups become more effective in campus ministry.

“We’re learning how we can leverage small groups to be a place of growth and a place of evangelism and outreach, and not just a place of discipleship and care,” she said. “That has been really transformational in how I view my staff work.”

Glorianne has been a strong believer in the value of her chapters’ weekly large group meetings, but she’s noticed that the learning style of students is changing. The large group is not as popular as it has been in the past and interest in the more interactive small groups is growing.

Along with everything else, Glorianne is adding one more challenge to her weekly schedule: reviving the InterVarsity chapter at her alma mater, Drew University. “It’s been too long for them not to have staff,” she said. “I have never forgotten the place where God called me to learn more about him and learn my vocation and my calling. When this opportunity to replant a chapter at Drew came around it was very obvious I needed to respond.”