Living Intentionally No Matter What 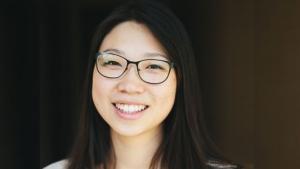 When MBA student Liz Dong was asked to help plan and moderate a Believers in Business conference panel on dealing with disappointments, she had plenty of experience to draw from.

After immigrating from China to the US in fourth grade, Liz studied hard and excelled in school. But her hopes for future success were devastated when she and her mother discovered paperwork mistakes by their immigration attorney left them without proper documentation. Liz and her mother trusted in God though and, as she explained in a Christianity Today testimony, God miraculously opened the doors at Northwestern University, where she graduated in 2011.

Finding work was difficult because of her immigration status, even with a college degree. As soon as Deferred Action for Childhood Arrivals (DACA) was implemented in 2012, which provided Liz and many other immigrants a temporary work authorization, Liz took a marketing job with a small eCommerce company. Then, as she took the Perspectives on the World Christian Movement course through her church, she began to discover ways to apply her faith and use her own immigrant background to help other immigrants.

She moved into an apartment complex in suburban Chicago and joined a small intentional Christian community that was living among and serving their many immigrant and refugee neighbors. On nights and weekends, Liz gave rides, worked with children, and offered other practical support. “We were neighbors and friends,” she said. “I helped them, but I was also blessed by my immigrant neighbors.”

Then she changed jobs to work with World Relief and the Evangelical Immigration Table, advocating for immigration issues from a Christian perspective and drawing from her rich background of experience.

Back in School Again

Liz dreamed of going to graduate school to study management. Chances did not look promising as she tried to make ends meet on her non-profit salary. But she reconnected with the same foundation that had supported her as an undergrad at Northwestern, applied at the Booth School of Business at the University of Chicago, and found herself admitted.

Her focus on management could have led her to stay in the nonprofit world or to a job in business. Either way, she knew she wanted to integrate her faith with her vocation. After a conversation with a missionary who was visiting her church she decided to learn more about that integration by attending Urbana 15, InterVarsity’s Student Missions Conference in St. Louis.

At Urbana, Liz discovered other business students who shared her conviction. “The Business as Mission track was highly applicable and practical for understanding the theology of work and that all work is ordained by God when it's done in a way that honors God,” she said. That was also where she met Mark Washington, who directs InterVarsity’s MBA Ministry.

Mark urged her to join Christians in Business, InterVarsity’s fellowship at Booth, where she eventually became one of the leaders. He also recommended the annual Believers in Business (BiB) conference that’s held in New York City each winter (This year’s dates are February 21-22).

The first time she went to BiB, Liz found it refreshing and challenging to hear from business leaders who shared about their work experience and how they integrated faith into their workplace. The second year she went as a finalist in a Business as Mission competition. Her team helped a Christian company grow its profitability, invest in the communities where it employed workers, and advance other objectives that supported God’s kingdom. She described it as an enriching experience. Her team placed third.

Although the Booth MBA program normally lasts two years, Liz worked full time and went to school part time, stretching it to three years and allowing her an additional opportunity to attend BiB. For her third year, Liz served as a planner and moderator of the panel on dealing with disappointment.

“That topic was important to me,” she said. “It’s good to showcase more than just the successes. In our failures and disappointments, we discover God sees success differently than how we see it.”

Today, Liz no longer lives in the midst of an immigrant community. She also has a new job, working with a financial advising service. But she still advocates for immigrants and refugees in her spare time.

Liz is thankful for the path that God has led her on, particularly through the challenges of graduate school.

“I knew that everywhere I went, whatever I did, I wanted to somehow integrate my faith with the thing that I did, in the place where I was at,” she said. “Christians in Business, the campus fellowship at Booth, provided me a means to do that.”

Looking back at the seemingly insurmountable challenges she faced before both her undergrad and graduate school experiences, she sees God’s faithfulness.

“Each step of the way that God has led me, God has opened doors. Sometimes even unbeknownst to me at the time, God has prepared me for the next step. But I also know that God has used and is using all of my experiences in the past to prepare me for what he will have me doing next.”