Living Without Regret: How One Alumnus is Fighting Injustice | InterVarsity
Skip to main content
News
By Kathryn Brill

Living Without Regret: How One Alumnus is Fighting Injustice 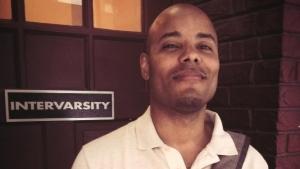 “Even before I started following Jesus, I always had a heart to serve others,” said Azikiwe Calhoun. But during his years at City College of New York, Azikiwe found a deeper relationship with the God who came to serve—as well as new dreams for what his own service could look like.

By connecting with Christian nonprofits and service organizations in his community, Azikiwe was able to invest more fully in those around him while being mentored by other leaders. He also discovered that he could partner with others in service to accomplish much more than they could do individually. “If it wasn’t for InterVarsity, I wouldn’t know that so many people were with me on these issues,” Azikiwe said.

Christ at the Center

As a high school student, Azikiwe went to church with his family, but “it was just something you did.” After he moved to New York City, though, God was on his mind. Azikiwe felt that God was calling him to get serious about faith and renew his relationship with God. He wasn’t sure if he was ready to give his whole life to God, but he had been running into “brick walls” in his quest to arrange his life the way he wanted. “Whatever the Lord has for me, it has to be better than what I’m doing,” he remembers thinking. And indeed, God transformed his life in ways he wasn’t expecting.

One of those ways was through the InterVarsity chapter at City College. Azikiwe got involved in the chapter during his senior year, after he lost a job that had been taking up most of his free time outside of school. Azikiwe saw this loss as an opportunity to concentrate more on his studies—and to finally join a community of believers on campus. “I started attending a small group and it took off from there,” he said.

Azikiwe attended the Big Event, the New York/New Jersey region’s fall student conference. He participated in Feed 500, a ministry of the New York City Urban Project, where students make and distribute lunches for the homeless while learning how to better respond to the people they see every day on the street. He volunteered at relief efforts after Hurricane Sandy hit Manhattan.

All these activities fueled Azikiwe’s desire to fight injustice for the sake of God’s kingdom. “Before all this, I didn’t know there were nonprofits with Christian foundations,” he said. But after meeting so many Christian nonprofits, Azikiwe began to dream about one day working for an organization with Christ at the center.

Stepping Out for Justice

That dream was closer than Azikiwe thought. In October 2012, he attended a citywide prayer and worship gathering called One Cry. Various social justice organizations from around New York City were displaying information—including Price of Life, a student-led campaign to fight human trafficking in New York City and share how God cares about injustice. Azikiwe gravitated to the Price of Life booth at One Cry, where he was inspired to sign up to volunteer. “I knew human trafficking existed, but I didn’t know it was right here—I always thought it was over there,” he explained. He was immediately passionate about doing something to help.

In the spring semester, Azikiwe had an opportunity to intern with Price of Life, working with Jeannie Rose Field, Price of Life’s assistant coordinator. He helped out at various events such as Proxe Stations, interactive art displays where information about trafficking is presented alongside the gospel. He also worked to promote Price of Life on social media.

Through his work with Proxe Stations, Azikiwe developed the ability to talk about the gospel in many different situations. Because of their eye-catching displays, Proxe Stations attract a wide audience, and he had to be prepared to answer a variety of questions about Jesus and human trafficking. “The initial nervousness was most difficult,” he recalled. “I asked myself, ‘How will I approach people?’” As Azikiwe helped with more Proxe Stations, though, he grew more comfortable with sharing the Gospel in unusual ways. “InterVarsity challenged me to step out in faith,” Azikiwe said. “God pushes you to step out.”

His whole internship experience was one of “growing and stretching,” as he put it. Many leaders in Price of Life, especially Jeannie Rose, mentored him and other recent graduates in the field of social justice work. And he grew and developed as a leader, gaining confidence in his skills along with more leadership responsibilities.

Because of his internship experiences, Azikiwe knows that God’s heart for injustice captivates people, and so he’s confident that Price of Life can transform New York City. “It’s going to be big,” he said. “Price of Life is not an organization that’s just talk. It’s actually engaged with people.” Azikiwe also knows the ways that God has transformed his own life through this work. First, he’s gained a new understanding of God’s character: “God is a God of justice, but he’s also a God of mercy at the same time. And he’s at work through everyday things.” He’s also learned to avoid burnout and persevere in his work by “seeing the end in the beginning,” as he put it. And he’s grown to rely on God’s strength, not his own, for the energy to work for justice.

Azikiwe is also making plans to pursue a justice-oriented career. This fall, he started a 15-month program in international development at Eastern University, a Christian school in Pennsylvania. “They teach you the spiritual as well as the practical aspects,” he explained. After completing his degree, Azikiwe hopes to work with an organization that combines sustainable practices, poverty alleviation, and community development—“and if I could share the gospel at the same time,” he added, “that would be awesome.”

Wherever he ends up working, Azikiwe is encouraged by the number of Christian justice organizations that he’s seen during his time with Price of Life. “People of all backgrounds and all professions are serving God in these organizations. There’s no limit!” he said.

Azikiwe advises everyone to get involved in fighting injustice: “If you do nothing, you’ll regret it. I’m happy I’ve done something.”  His passion and enthusiasm indicate that he’s more than happy—he’s experienced the joy that comes from using his talents to honor God and bring his justice to earth.