Looking Back at 47 Years on Staff 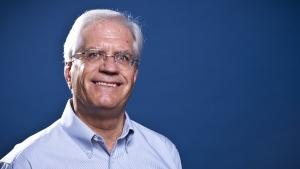 InterVarsity Press (IVP) publisher and InterVarsity vice president Bob Fryling has a lot of friends. Many are long-term relationships that go back to when he began his career as an InterVarsity campus staff member 47 years ago. But Bob enjoys his acquaintances among newer staff just as much, noting that individuals with a like-minded spiritual curiosity and eagerness to follow God’s leading seem to find a natural home in InterVarsity.

“I’m grateful for the DNA of InterVarsity, things that capture the imagination and dig deeply into the soul such as the love for Scripture,” he said, speaking at a recent chapel service at InterVarsity’s National Service Center in Madison, Wisconsin.

During Bob’s almost 20 years at IVP, IVP has been consistently recognized as a Best Christian WorkPlace. With more than 1,700 titles in print, IVP books also consistently win awards for their quality. And IVP has published more than 15 million Bible study guides.

Bob’s love for Bible study flourished as an InterVarsity student, preceding his time on staff, as he began the practice of a daily quiet time. “That discipline to daily ask, ‘What does the Bible say?’ is one of the reasons I’ve stayed with InterVarsity,” he said.

Bob illustrated his talk with references to the Rembrandt painting The Storm on the Sea of Galilee, InterVarsity has weathered some storms, but maintaining our focus on Jesus as Lord has kept the ministry afloat. He identified three practices of following Jesus that he has found most significant about his time with InterVarsity.

Bob concluded by encouraging his listeners to stay focused on the mission of reaching the campus with the gospel: “This is a great movement of God that he has used for decades and will continue to use for the sake of his work on campus and in the world.”

Bob’s complete chapel talk is featured on the InterVarsity podcast.