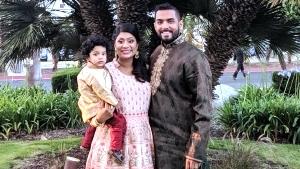 “Jocin means joy,” Jocin Thomas said, and it’s pronounced JOE-sn. And if it wasn’t for InterVarsity there would have been a lot less joy during her days as a student at Baruch College in New York City.

“InterVarsity is what made my college experience and where I grew the most, spiritually, professionally, and in leadership,” she said. She commuted to Baruch each day from her home in Long Island and, without an InterVarsity community, Baruch would’ve been just another thing to do. “It would have felt like high school all over again.”

Someone in her church recommended InterVarsity to her, so she connected with the chapter early in her freshman year. It was a dissonant connection at first. People were seeking God, experiencing God, and studying the Bible differently than what she knew from her church. But since their love for God was unmistakable, she stayed with it.

“I didn’t realize what the gospel was, and how to share it,” she said, describing her spiritual life before college. “Starting to see my faith outside of the four walls of the church and developing an authentic relationship with God was huge.”

InterVarsity gave her college years purpose, something she missed after she graduated with her Human Resource Management degree and worked in retail for two years. When she switched jobs and began working at a church, she found a mission but she wasn’t sure that was God’s purpose for her.

“I was sitting by the pier in Bay Ridge, saying, ‘God what do you want me to do next?’” She thought of InterVarsity and how campus ministry had changed her life. She had been helping as a volunteer but joining staff seemed too challenging. Her parents had emigrated to the US to seek a better life for their family and it was shameful in their culture to ask for financial assistance.

And yet, she didn’t see any other option. “My life changed through campus ministry. I wanted to be a part of that and see that happen for other students, and faculty,” she said.

She wrestled with the decision for months before finally plunging ahead. She found a way to present her ministry challenges that resonated with potential partners and overcame some of the cultural barriers.

“The way the Lord worked was so great because now it is the most favorite part of my work.” She said. “I love being able to tell people about the work that God is doing. I thought my culture would have rejected me but to see 80 percent of my network being the ones who are supporting me, that has been such a blessing.”

Jocin started in an administrative role, as Operations Director for InterVarsity’s New York City Area. Then she became an Associate Area Director, and is now an Area Director.

She loves working with her fellow New York City Area Directors, and is constantly thinking about her time as a student at Baruch. “What helps me in my role as Area Director has been having a healthy example of what a chapter can look like,” she said. “That has really helped.”

As a student, Jocin knew little about InterVarsity beyond her campus. Now she has the bigger picture and a bigger purpose.

Over the decades, InterVarsity has typically ministered on about 15-16 New York City campuses. Today that number has grown to 25. But all five boroughs of New York have 85 campuses, with 600,000 students. Jocin is always looking to see where to go next, where to have the biggest impact.

“This is a place where I can see people encountering God,” she said. “I see God at work in all these different areas. And being able to work with people to make it happen, seeing God at work, it never gets old." That’s joy for Jocin today.

Come work with us