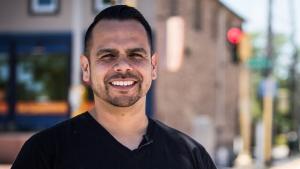 Moises (Moy) Mendez identifies with characters in the Old Testament, perhaps more than most of us. Just as God called Abram to leave his home and travel to a new land, God called Moy out of business school to seminary. So Moy followed God’s leading, not knowing where he would end up.

Moy joined the staff at his church and helped develop its ministry in several areas. However, like David, who was invited to fight Goliath wearing Saul’s ill-fitting armor, Moy felt uncomfortable with the idea of becoming a senior pastor at the church. That was not where God wanted him.

But when a mutual friend connected Moy with Mark Washington, the director of InterVarsity’s MBA ministry—part of our Graduate and Faculty Ministries—he knew he had found his calling. “[MBA ministry] is helping students understand the integration of faith and work,” he said. In this sense he feels a connection with Frederick Buechner, who famously said, “The place God calls you to is to a place where your deep gladness and the world’s deep hunger meet.”

Moy identifies with students who have a desire not only to be successful in business, but also to succeed in a way that honors God and testifies to his role in their lives. “There’s a large body of believers who seek to do the same thing that I want to do, honor God in the workplace,” he said. “It’s a genuine desire to honor and worship God.”

In academic cultures that produce some of the top business leaders in the world, it’s not always easy to be known as a Christian. “As soon as somebody finds out you’re a Christian, right away they take 15 points off of [their perception of] your IQ,” Moy said. But regular Bible studies as well as occasional conferences give the students new perspectives on ways to be better at business while following biblical principles. Almost 80 students recently turned out for a conference on private equity sponsored by the two MBA fellowships at Booth, about double the usual attendance.

The full-time students at Booth also sponsor a weeklong business ethics conference every year. Last year the dean of the school opened the conference, and attendance was around 700. It also won an award from the school for the quality of its programming. Members of all four Chicago chapters participate in the annual Believers in Business conference in New York City as well.

The part-time groups at both schools are composed of busy professionals who are working while taking classes. Some participants in the executives’ program fly in from other states for weekend classes. Moy uses technology to keep in touch with them, including social media and video conferencing.

His own immersion in the world of manufacturing and business began in high school, operating lathes and mills for a tool company. Moy’s employers recognized and rewarded his skills and interest by underwriting further education for him. He became an aerospace machinist, educating himself on computer robotics and international business relations in his business school classes.

At the same time, he was also yearning to honor God with his life and his work. “It was there in business school that I started having this crazy idea for full-time ministry,” Moy said.

Moy joined InterVarsity staff in January of 2015. Mark Washington says Moy is a fast learner and the MBA ministry in Chicago is flourishing under his leadership. “We are very excited to have someone who combines experience in vocational ministry with business experience, in addition to having a love for students and faculty,” Mark said.

Moy said that one of the reasons his work is flourishing is InterVarsity’s culture. “I’ve never known of a Christian organization that has such a deep desire to know God through the Scriptures and also looks to balance that out in such a holistic way,” he said.

Moy shares that culture with students at Booth and Kellogg, believing that it will become part of the businesses that they work in for the next few years and for decades to come.