Ministry is About Meeting People 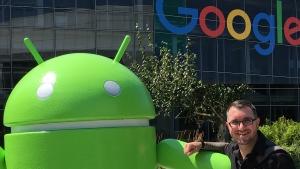 When InterVarsity chapters met in the spring to develop plans for connecting with new students in the fall, they had no idea a digital game would be introduced in July that might make connections a lot easier.

Some chapters have found a way to incorporate Pokémon Go into their New Student Outreach (NSO). The jury is still out regarding its effectiveness; but the popularity of the augmented reality game illustrates the potential impact of InterVarsity’s new Ministry in Digital Spaces (MDS). MDS director Bret Staudt Willet said, “The opportunity to meet strangers, build affinity, and do that quickly, is just remarkable.”

Pokémon Go has accumulated both supporters and critics in its short lifetime. Bret sees its popularity positively. “The point is that people are doing it and we can engage them,” he said. “It’s a fantastic icebreaker. We can meet new people and go to parts of the campus we’ve never been before.”

Bret was appointed the first director of MDS just over two years ago, and came to the job after 11 years of campus ministry in eastern Pennsylvania. He believes online ministry is a good way to meet students where they’re at while prompting curiosity about who Jesus is among skeptics and seekers and opening their eyes to new perspectives.

Bret has been a recreational gamer for a number of years, and has found that it’s an easy way to connect with students. Ten years ago, when he and his InterVarsity student leaders were all playing the game Kingdom of Loathing, he discovered it was a way to catch up on what was happening in their daily lives through the chat system incorporated into the game. “It didn’t occur to me at the time that this could be its own ministry,” he said.

About the same time, through the game Halo 3, he met a friend of one of his students who attended a nearby campus, Penn State Harrisburg. “He was miserable and ready to drop out of school,” Bret said. After going to visit with the student, Bret later ended up planting an InterVarsity chapter at the campus, a chapter that’s still active today.

Bret’s attraction to online communities came early in his life, through an America Online computer disk that arrived in the mail when he was in middle school. He searched for other users sharing his own birthdate and found a connection. “I happened to find someone who became an important friend all the way through high school, and we still exchange Christmas cards,” he said.

But Bret knows that community offline is also important. He was devastated when his parents announced they were separating during his freshman year in college. His friends in the dorm weren’t much help. “They said, ‘Give it time and it will get better.' And I said, ‘I need a better answer.’”

He sought out his Bucknell InterVarsity staff worker, Jesse North, who gathered a group of fellow students to pray with him. “That didn’t immediately fix anything, but that was the first time in my life where I felt like I was sitting in the presence of God and doing it with a group of people,” Bret said.

That experience kicked off a long unraveling of a lot of the easy answers and superficial relationships he had relied on up until that time. His InterVarsity involvement and his spiritual pursuits became more intentional. His career plan to be a college math professor changed, particularly after he spent two summers working at an InterVarsity Urban Program in Lancaster, Pennsylvania. “That totally changed my life,” he said. “I decided I wanted to invest the rest of my life in helping people.”

When it came time to actually settle on a career, he considered youth ministry but was challenged by a friend who asked, “What kind of conversations do you want to have?” He knew that the conversations college students have, as they begin to ask the big life questions, were what he wanted to be involved in.

Bret became an InterVarsity campus staff member in 2003, working with students at Franklin & Marshall College, a small liberal arts school in Lancaster. As he ministered to students he also took some classes from Michigan State University in game design and later pursued a master’s degree in online communities and social media. So when the MDS opening popped up, he was ready to step in to the role.

This summer Bret was invited to speak at Passion Talks, a conference on the intersection of technology and Christian faith, held at the Google offices in Mountain View, California. He told participants that he rejects digital dualism, the idea that the digital and physical worlds are separate. “It’s all real life, real people doing real things,” he said.

MDS currently operates with five paid staff and five volunteers, located across the country. At this early stage it’s unclear what MDS will become, but it is clear that MDS has a bright future. As Bret said, “Ministry is about meeting and connecting with people. And the Internet is phenomenal at helping people to connect.”

UPDATE: Bret is interviewed by Mission Network News on the Pokémon Go phenomenon and technology as a new way to ministry.