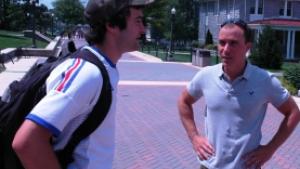 Campus traffic jams are common at schools across the country this time of year, as incoming freshmen and returning upperclass students arrive to claim their housing and get settled for the start of classes. At James Madison University (JMU) in Harrisonburg, VA, as at many campuses, InterVarsity students are right in the middle of the traffic, volunteering to help with the move-in and eager to meet new students.

“It's more than Southern hospitality,” said campus staff member C.J. Goeller. "I would like to think that it's biblical hospitality.” C.J., who has been on staff with InterVarsity since his graduation from JMU in 1995, can list a schedule of events planned for the next several weeks to help freshmen meet current students. "It's a very we-love-freshman culture. We want to welcome them in," he said.

Move-in week this year began for the InterVarsity students on Monday night with the Movers Chapel service. About 200 upperclassmen who came back to campus early gathered in the large auditorium where the chapter usually meets. After the worship time, this year’s edition of the green InterVarsity move-in T-shirts were handed out and final directions for move-in were announced.

By the end of the week the freshmen are moved in. Most of the upperclassmen are back, and InterVarsity hosts a Friday night watermelon bash at a home with a large backyard rented by students just off campus. Slices from a dozen melons are served as students renew old friendships and make new ones. InterVarsity students trade phone numbers with new students and often make plans for the weekend.

"That first night there's lots of energy,” C.J. said. “Freshmen are looking for friends. Upperclassmen are talking with freshmen, because they were treated that way when they were freshmen. Everybody wants to find someone to hang out with, invite them to their home, take them to church that Sunday.”

The Beginning of Classes

Classes start the following Monday, and that’s the first day JMU allows organizations to host on-campus events for freshmen. InterVarsity hosts ice cream socials at several locations on campus. Invitations are issued for guys to a barbecue and slip and slide at the faculty adviser’s house the following night, and to ladies for a “trashion show” on Wednesday night.

"The Tuesday and Wednesday meetings are where we make a public statement about who we are,” C.J. said. “One of our seniors will say, 'It's been great getting to know you. We want you to know we're a group of students who are trying to follow Jesus Christ on our campus. Whether the name of Jesus means anything to you, or scares you, or whatever, we just want to know you and invite you into our community.'”

The students are invited to the weekly large-group meeting on Friday evening. On Friday evening the freshmen are given the opportunity to sign up for a small group Bible study, which often will become their small group community for the remainder of their time at JMU.

InterVarsity’s New Student Outreach (NSO) at JMU has been like this for a number of years. “It's something that's become part of the culture of the chapter,” C.J. said, adding that it fits well with the culture of the campus and the community. It places a lot of responsibility on student leaders. And in this manner the chapter has grown to about 500 students, which is the largest InterVarsity chapter in the country.

While involvement with InterVarsity takes a significant commitment, C.J. says students are also encouraged to get involved in the life of the campus. "Whatever your interest—music, student government, social activities—then we want you to go do that on campus, thoroughly enjoying yourself, making legitimate friendships, as a Christ follower. Most of the students really take to that."

Doug Arms, who is now an InterVarsity staff intern after graduating from JMU in 2009, remembers NSO as “well organized and fun,” adding “the relationships that are built that week are a beautiful thing.” Doug became a small group leader for three years, coordinated JMU’s large group meeting for one year, and was able to disciple a number of other students. “Having a place where I was serving others stretched me and was probably the single greatest factor contributing to my spiritual growth,” he said.

Almost all of InterVarsity’s 859 chapters across the country will be involved in some type of NSO event during these weeks because InterVarsity recognizes that the relationships established by students during their first week on campus are critical for the success of their collegiate career.