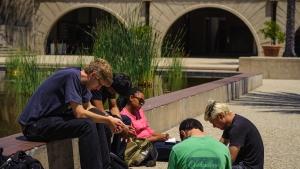 (Madison, WI) --- Tom Lin, the president of InterVarsity Christian Fellowship/USA, has announced a restructuring of the Executive Team that provides leadership for the campus ministry which recently marked its 75th anniversary.

The newly named Executive Vice Presidents who make up the Executive Leadership Team (ELT) will work collaboratively to focus and to resource the whole ministry, as well as lead a larger number of Vice Presidents and national directors.

Jason Thomas is Executive Vice President of Field Ministry (Chief Campus Ministry Officer). His position focuses on InterVarsity’s direct mission to students and faculty. Jason has served on staff for 18 years, as a Campus Staff Minister, Area Director, Regional Director, National South Asian American Coordinator, and most recently as the National Field Director for the South Central Cluster of regions. Jason was a student leader with InterVarsity at Western Michigan University at a time when the chapter grew from 25 to 350 students. He is passionate and innovative, with strong leadership experience. Jason began his new position on December 5, 2016.

Andrew Ginsberg is Executive Vice President of Advancement (Chief Development Officer), and will lead the resourcing of InterVarsity’s mission. Andrew brings strategic leadership and 25 years of experience in Development and Communications, the last six years for InterVarsity as Vice President of Advancement.  Previously he served in a number of executive roles in biotechnology and pharmaceuticals. Andrew came to faith through InterVarsity’s ministry at Duke University. He will shift to the Executive Vice President role on January 1, 2017.

DeeDee Wilson is Executive Vice President of Finance & Administration (Chief Financial Officer). DeeDee is joining InterVarsity from Operation Mobilization USA (OM) where she was the CFO. Prior to OM, DeeDee served in leadership roles in Fortune 500 companies, including as the CFO of Nike USA, and was named one of CFO Magazine’s “Top 25 Women CFOs to Watch.” DeeDee is passionate about Christ’s mission on campus. She is currently a member of InterVarsity’s Women’s Advisory Council and her daughter serves as a campus staff minister with InterVarsity. DeeDee will begin on January 3, 2017.

Paula Fuller is Executive Vice President of People & Culture (Chief Culture Officer). She will focus on developing staff and developing the organization. Paula’s passion is serving staff and seeing transformation both in colleague’s lives and in the organization. Her leadership as Vice President/Director of Multiethnic Ministries for the past 11 years has led to significant growth in the number of students of color and staff of color involved with InterVarsity. Paula first came into contact with InterVarsity as a member of our Board of Trustees. She will shift to her new role on January 1, 2017.

In addition, Greg Jao will also serve on the ELT, in the role of Senior Assistant to the President. He will continue his focus on Executive Office communications and external relations that he maintained as Vice President and Director of Campus Engagement. Greg brings 22 years of InterVarsity experience to his position: having worked both at InterVarsity Press and in campus ministry. He has also served as a Trustee of Langham Partnership USA. As a student, Greg was a leader of the InterVarsity chapter at the University of Chicago. He will begin on January 1, 2017.