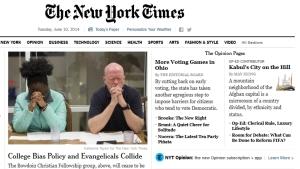 The New York Times gave front page treatment to InterVarsity and the campus culture in the June 10, 2014 article, Colleges and Evangelicals Collide on Bias Policy. The story gives what we view as an accurate and balanced report on how nondiscrimination policies unfairly and illogically discriminate against our chapters when they require that we avoid using Christian qualities to select our chapter leaders.

Most of the reaction from other media—including an editorial by the Denver Post and commentary from several self-identified atheists—was critical of the positions taken by college administrators:

The New York Times article comes in the midst of a growing concern about the climate for religious viewpoints and intellectual diversity on college campuses. InterVarsity President Alec Hill took note of that climate in his June column, "Academic Justice."

Dr. James Wellman, a professor of American Religion at the University of Washington, has written a popular blog post which concludes: “Shouldn’t a university in this day and age be a place where all religious views can be expressed? A domain where these freedoms should be fiercely protected? I think so. But the truth is that they are not and it is one of the last acceptable prejudices on many US college campuses.”

InterVarsity supports the value of nondiscrimination policies. But we believe they should be applied logically, in a way which values the contribution that religious groups offer to the campus culture by remaining faithful to their inherent values.