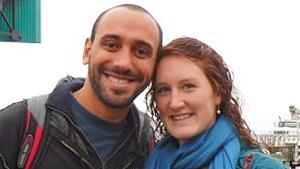 PhD student Hannah Fakhouri woke up on October 4th to the news that her faculty adviser had won a Nobel Prize. University of California-Berkeley Physics professor Saul Perlmutter was one of three winners of the annual Nobel Physics prize.

“It’s definitely been an honor to work with Saul, who continues to have the same passions that he did 15 years ago, that led him to the discovery of the accelerating universe,” Hannah said. “Everybody in the field knew the magnitude of the discovery and knew that some day he would win a Nobel Prize. But his name carries a little more weight in the broader community now.”

When she gets her degree, having the signature of a Nobel Laureate on her recommendation letters can only help her job prospects. The hubbub over winning the prize may also make it a little harder to find time to meet with her adviser. But right now it’s an exciting time to be a part of the Physics Department at UC-Berkeley. Everyone involved in the project participated in a panel discussion about it, the day the award was announced.

“He is so excited about the science and about how much fun it was to make the discovery,” she said. “It was a lot of hard work and a lot of late nights, but his wanting to share the honor with everyone else has been very striking.”

Hannah is one of the leaders of Veritas Fellowship, InterVarsity’s fellowship for Graduate Students at UC-Berkeley. She connected with Veritas Fellowship almost immediately upon her arrival at Berkeley in 2006, after earning her undergraduate degree at the University of Kansas.

“In Veritas I found a community of whole hearted and diverse Christians,” she said. Like any top tier university, Berkeley has people in many different fields of study, from all kinds of backgrounds, and from many different countries. “I have made incredibly close friendships and have continued to grow in the Lord. I am very thankful for the community and the fellowship that I have in graduate school.”

Hannah said that being involved in Veritas Fellowship has made a big difference in her success in graduate school. “I love that we have some people who have been in the faith forever, and some who came to faith as undergrads and so are relatively new. We have some people who study Physics, such as myself, and some who are in social welfare. The diversity of fields is a big strength that we have,” she said.

Hannah meets with a small group of women for a weekly Bible study. It’s a group with which she can share her frustrations and difficulties, as well as her victories. “Not having that would make it hard to weather the ups and downs, make it hard to remember in the trying moments that I believe God has called me here,” she said.

When she first arrived at Berkeley, Hannah was involved in a Physics Prayer Group that also met weekly. Most of the members attended Berkeley’s First Presbyterian Church.  “We saw so much of each other and we had so many shared experiences, being in the same field of science, that we bonded,” she said. “There were such deep friendships in that group.”

One of the members of the group was Onsi, a Lebanese Christian who had been raised in Dubai, and attended MIT before he came to Berkeley. Hannah and Onsi were friends for about a year and a half until, Hannah said, “something clicked.” They began dating and about two years ago they were married. When they were still dating they both happened to be included in a public television video report on Saul Perlmutter’s research.

Carrie Bare, an InterVarsity Campus Staff Member who formerly worked on the Berkeley campus, said that Hannah and Onsi have been key leaders in the chapter.   “Both committed early on to regular fellowship with this group, both the large group meetings as well as regular involvement with small groups,” Carrie said.

Hannah’s InterVarsity involvement has also led her to consider future options that may lie beyond the world of physics. “Being on the leadership team with InterVarsity has helped me develop a skill set that I didn’t necessarily know to identify in myself,” she said. “Coordinating and organizing and leading groups  seems to be something that God has gifted me in.”

No Conflict Between Science and Faith

Having been raised by parents who encouraged her to grow both spiritually and intellectually, Hannah doesn’t see a conflict between science and faith, between her physics research and her evangelical Christian beliefs.  “The creation is something marvelous and it’s in line with God’s heart for us to study it and pursue it and to understand it with the same sort of rigor that we would approach anything we’re talking about related to God,” she said. “Learning about God’s creation and how it works, only magnifies the glory of God that I see.”

Hannah said that her passion for understanding how the universe works comes from dark nights on the Kansas prairie as she was growing up, observing the power and magnitude of the star studded sky overhead. Today, as she continues to pursue answers to some of the same questions that helped win Saul Perlmutter a Nobel Prize, Hannah still sees the glory of God reflected in the heavens.