Not Ready to Retire, and Back on Staff | InterVarsity
Skip to main content
News
By Gordon Govier

Not Ready to Retire, and Back on Staff 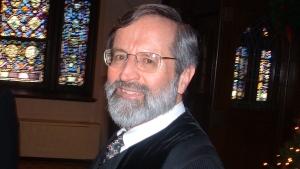 George Stulac’s career plan was to get a PhD in history and become a professor. Instead God called him into student ministry with InterVarsity and then pastoral ministry. He pastored Memorial Presbyterian Church in St. Louis for 33 years. Now, after stepping down from the pulpit and still eager to be involved in the work of the gospel, God has called George to a new ministry in which he’ll be working closely with history professors and other faculty.

Last summer, as George reached retirement age and ended his time at Memorial Church, he gave prayerful consideration of what he wanted to do next. He was not ready to retire from ministry.

“I wanted these last years to count for the most fruitful ministry that I could do,” he said. “So I spent that time asking questions about what my gifts are, what I do best in ministry, what motivates me, what satisfies me, what would I be most fruitful in doing?”

His InterVarsity experience as a student and then a staff member gave him a great love for studying and teaching the Bible. He also wanted to be able to provide pastoral care. And he especially wanted to get involved in something that was effectively reaching non-Christians with the gospel message.

He checked with a variety of ministries and finally talked with the director of InterVarsity’s Central Region, Jon Hietbrink. Jon proposed a job description that would allow George to be a pastor to InterVarsity’s Central region staff, working with them in spiritual formation and teaching the Bible at staff gatherings.

“What really motivated me was that I was being told that InterVarsity was seeing more students become Christians than ever before in its history,” George said. “That just captured me, that I could have a ministry to staff, so that they could have a deeper ministry to these students.”

But that wasn’t all. Jon also invited George to get involved with faculty ministry. That was equally attractive to George.

“When I became pastor at Memorial Church 33 years ago, I began praying that God would bring more Christians into faculty positions at Washington University, because I could see that Christian faculty can have a big influence in the life of students,” he said.

Finally, in the last few years of his ministry at Memorial, George had started to see more faculty members getting involved at his church, and colleagues were telling him the same thing was happening at other St. Louis churches. Don Paul Gross, InterVarsity’s Graduate and Faculty Ministries (GFM) Regional Director for the South Central Region, told him that GFM staff were noticing a wave of Christians moving into faculty positions across the country.

“It appeals to me to have a ministry that’s part of what God is doing to answer what I’ve been praying about for 30 years,” George said. “If more students are becoming Christians than ever before, and if more Christians are becoming faculty than ever before, between those two things it appears to me that  God is changing the university in a remarkable way, and that’s what I want to be part of.”

Hearing George talk about his years of pastoral ministry and his ambitious plans for his “retirement years,” it’s hard to imagine him as the shy, withdrawn, lonely introvert who first met InterVarsity as a student at Washington University a half-century ago. A catchy program title piqued his curiosity and drew him to an InterVarsity discussion where he met another student, Ron Hendrix, who befriended him and unsuccessfully invited him to more InterVarsity meetings for the next three months.

Ron never gave up and eventually George relented. “Ron was so faithful, and I finally went with him just because he had won my trust,” George recalled. George was clueless about Christianity but became curious. Ron and other chapter members encouraged him to become an honest seeker of the truth, and two years later he became a follower of Christ. As a senior he became chapter president.

He then enrolled at Gordon-Conwell Theological Seminary, not with the intent of becoming a pastor but rather because he wanted to learn more about God. “I went to seminary just for the fun of learning more about the Bible and theology,” he said. But then God called him to ministry.

But even with decades of ministry experience behind him, George is looking ahead to what God has next. “This may be the most fruitful ministry of my life,” he said. “Not because of what I’m doing but because of what God is doing.”