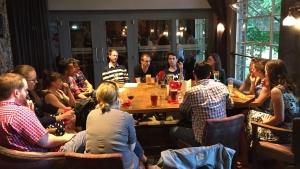 Questions define some of our deepest concerns, questions such as: Does the separation of church and state mean the separation of religion from politics? Do my sexual desires define me? Is education really the solution (and is ignorance really our biggest problem)?

At New York University (NYU), where I am an InterVarsity Campus Minister working with graduate students, I host what I call Socratic Happy Hours: civil and convivial conversations about the Big Questions. At these gatherings, Christian and non-Christian graduate students engage in generous debate and serious dialogue about both perennial questions and present concerns. Our motto is, “Friends don't let friends live unexamined lives.”

A few months ago, I hosted a Socratic Happy Hour on the question, Given the amount of gratuitous evil and innocent suffering in the world, how could there be a God? A young grad student from Pakistan—I’ll call her Sara—was joining us for the very first time, as was another grad student I’ll call Ramiro, who is a devotee of Albert Camus’s existentialist philosophy.

Our conversation centered on a heart-wrenching scene from Elie Wiesel’s Holocaust memoir, Night, in which the SS guards at Auschwitz hang a young boy in front of their horrified prisoners. Wiesel wrote, “Behind me, I heard [a] man asking: ‘For God’s sake, where is God?’ And from within me, I heard a voice answer; ‘Where is He? This is where—hanging here from this gallows.’”

As we read the passage Sara’s eyes grew wide. “How did you know?,” she asked. “How did you know this was my question?” I pressed her for more details, and she sheepishly explained that, though she still considered herself religious, she had not prayed in many years.

In her home country she had witnessed injustices—she could not bring herself to elaborate—which she could not square with the existence of a good God. Not having a safe space to discuss her doubts in her own community, Sara had been silently undergoing a crisis of faith. But here at the Socratic Happy Hour, she had found a space to ask her questions.

Ramiro, on the other hand, resonated with a passage from the book River Out of Eden by the famous atheist and Oxford biologist Richard Dawkins: “In a universe of electrons and selfish genes, blind physical forces and genetic replication, some people are going to get hurt, other people are going to get lucky, and you won’t find any rhyme or reason in it, nor any justice. The universe that we observe has precisely the properties we should expect if there is, at bottom, no design, no purpose, no evil, no good, nothing but pitiless indifference.”

From Ramiro’s point of view, because there is no God, life, the universe, and everything are objectively meaningless. The only meanings and, therefore, the only morals, are the ones we make for ourselves.

I pressed Ramiro on this point: If what he and Dawkins were saying were true, then they could not say that what happened to that little boy in Auschwitz was actually, objectively, wrong; at most, they could say that they did not happen to like it. Ramiro, shifting uncomfortably in his chair, conceded that that was an implication of his view, but insisted he still believes that that’s just the way it is.

As the evening drew to a close we asked everyone to share one thing that they would be chewing on after our conversation. My friend Erick, a Lutheran church planter and newly minted InterVarsity volunteer, said, “I am going to be thinking about that little boy from Night. It kills me that we live in a world where that could happen, where an innocent kid could suffer like that.

“But I am also struck by Wiesel’s answer to the question ‘Where is God?’ There hanging from the gallows. Wiesel meant, of course, that God is dead. But the Christian gospel says something similar but infinitely more powerful: God is not distant and aloof, but he has chosen to suffer with us and die for us.

“When we look at Jesus on the cross we see God on the gallows, letting evil do its worst, and then overcoming evil and death in the resurrection. I know that that doesn’t quite answer the question of how God could let horrible things happen. But it does tell us what the answer to that question isn’t: It isn’t because He doesn’t care.”

Sara’s eyes got wide again. “That is beautiful,” she said.

Sara and Ramiro are now regulars at the Socratic Happy Hour. They suggest topics for future conversations, they bring their questions, they’ve started bringing friends, and with each gathering they open up more and more. Please pray that we would be effective witnesses to them and that God would draw them to himself.

Having a safe place to talk about Big Questions is one way God is bringing transformation to students at NYU.