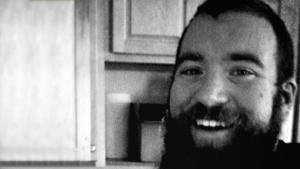 When Mike Mancini stopped at a gas station to buy gas one Sunday in the autumn of 2004, he pulled up to a pump that had a magazine stuffed in the nozzle. As he removed the magazine from the nozzle it opened to a page that said, “Seven Steps to Salvation, What Are You Waiting For?” Mike was stunned. “I didn’t follow the Seven Steps,” he said. “I just said, ‘Okay God, you win.’”

Mike was raised by parents who were atheists, so he did not like Christians or Christianity. But he liked to play bass, and a chance to play in a church’s worship band for some extra money was too good to pass up. One Sunday morning, after about a month, he was trying to focus on his music chart when something unexpected happened.

“All of a sudden it was head-to-toe goose bumps. I had a big lump in my throat, my eyes were welling up with tears, and I stopped playing. And I noticed the woman leading the song had stopped singing.”

Mike had experienced the power and the presence of the Holy Spirit. The worship pastor tried to answer some of his questions when they talked later. He gave Mike a Bible, which Mike began to read for several hours each day. He had a lot of questions and was surprised by the answers he was getting.

“I was learning things that were challenging my stereotypes about Christianity, about Jesus, and about what his message is,” Mike said. He was coming under conviction about his lifestyle. “So finally I prayed, ‘God if you are real then prove it. If you can’t prove it, I’m done. I’ll throw the Bible in the garbage. It’s not worth $100/week for what I’ve been going through.’”

On a Sunday morning shortly thereafter, he emerged from church with a new awareness of the beautiful autumn day around him. As he drove along the Connecticut highways from Danbury to New Haven he played a worship CD. “I had goose bumps,” he said. “I was crying in the car. It was clear that God was at work in my heart, taking away the shame that I felt.” Then later, on the way back later, he pulled into the gas station.

“I knew then that Jesus was real and that he was pursuing me,” Mike said. “I had always thought that you would have to be ignorant to believe Christianity was true. I realized at that moment that it would have been more ignorant for me to deny it was true.”

Mike became a regular church attender and grew in his faith. After he graduated he taught music in an urban charter school in New Haven. But he felt called to return to his alma mater, Western Connecticut State University (WestConn), to reach more students who were lost and without faith like he had been. When he discovered that the father of some of his students worked on campus with InterVarsity, he saw an opportunity and applied to join InterVarsity staff.

The church he was attending offered Mike a part-time job as a youth leader and then a full-time position as a youth pastor. It would be a way to support his family, but Mike wrestled with his call to minister on campus. “I knew that God had something in mind for WestConn,” he said. He prayed and waited for God to answer his prayers. And finally an answer came.

Mike had become friends with the college pastor of another nearby congregation, Walnut Hill Community Church. When that pastor left his job to join the military, Mike was invited to take his place. At first he was given a stipend and a house to live in near campus, while he continued to work with InterVarsity.

Then one day head pastor Clive Calver met with him and told him, “Mike, you’re a fantastic college minister but you’re a horrible fund-raiser.” He was invited to become fully employed by the church, but seconded to work on campus through InterVarsity.

Free to Focus on Campus Ministry

Mike feels very blessed to be freed up to work on campus with the resources of Walnut Hill and the tools of InterVarsity. He works hard to assure the students that while it’s important they be involved in a local church, it’s okay to be involved in other churches besides Walnut Hill. About a third of the 50 students currently active in InterVarsity at WestConn attend Walnut Hill.

Now that he’s fully free to devote himself to working on campus, Mike has found the chapter growing. Six members are just back from Urbana, InterVarsity’s Student Missions Conference, and are excited to engage the campus.

But the campus has also been shaken by the December shooting at nearby Sandy Hook Elementary school. “For a lot of young people, it’s trying their faith,” he said. Suddenly their understanding of injustice and brokenness in the world is much more personal. Because WestConn is a commuter school, a lot of students have connections to families that attended the school.

Doing ministry is challenging on a campus where everyone clears out for the night, or for the weekend. Mike discovered that although getting established is hard on a commuter campus, once the chapter becomes known on campus it gets easier. “When they see a small group of students that’s actually doing something, it’s attractive to other students and they want to be a part of it,” he said.

A few of the students who have gotten involved in InterVarsity had said they were only planning to stay at WestConn for a year before moving on to a bigger campus. Now they’re planning to stay and get their degree at WestConn. “God is moving and working and this is the place where they want to be,” Mike concluded.