The Passion of Greek Conference 2017 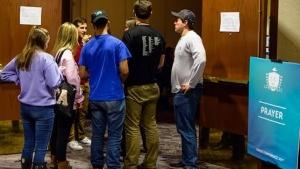 “I don’t know if it’s a revival, or an awakening, or a cultural shift in this generation of students,” said Brandt Booram, Greek InterVarsity’s Associate Director for Conferencing. “Greek students want to know God, but they want to experience him more than anything else.”

In his 15 years of ministry with fraternity and sorority students, ever since he was a student, Brandt has never seen a hunger and thirst for God like he saw this year at Indianapolis. The students’ desire to encounter God and deal with their own brokenness also surprised InterVarsity evangelist York Moore, who was the featured speaker.

“God’s presence was thick throughout the conference with spontaneous weeping, prayer, community huddles, and passionate worship,” York said. “The students are interested in authenticity, not easy answers and simple formulas to faith. They want to experience the true presence of God in their lives and their communities.”

Attendance at Greek Conference continues to increase, growing from 514 last year to 664 this year in Indianapolis, which was held the second weekend in February. Seventy students made a first-time commitment to become a follower of Jesus. Forty-one campuses were represented.

The weekend before Indianapolis, and the weekend after, Greek Conferences were held in Los Angeles and Raleigh. A total of 990 students from 89 campuses attended the three events, which was more students but fewer campuses than a year ago. Brandt calls the increasing number of student attendees a sign of healthy growth. “That tells me that Greek ministry is helping staff grow Greek InterVarsity on their campuses,” he said.

Los Angeles is in its second year hosting Greek Conference. Southern California staff have been working to plant Greek ministry on 17 campuses, and their success is shown in the increasing numbers who are attending Greek Conference. A student who finished leadership training at last year’s Greek Conference felt encouraged and empowered to lead a Bible study in her sorority at San Diego State University, and saw 12 sisters come to faith. “We’re hoping for those kinds of stories—students who are mobilized to launch chapter ministries from Greek Conference,” Brandt said.

The final Greek Conference weekend shifted from Charlotte to Raleigh this year. The move east brought the conference several hours closer to many of the campuses on the eastern seaboard, and also put Greek Conference right in the middle of a half dozen schools that are ripe for planting Greek ministry.

John MacKorell, a Clemson alumnus and the Associate Director of Resourcing for Greek InterVarsity, challenged the Raleigh attendees on the nominalism of their faith. “We saw students identifying strongly with John’s story, of faking it for most of his life,” Brandt said. John invited them to live authentic lives of faith and to follow Christ, and many responded.

“Greek Conference feels healthier than ever,” Brandt observed, noting that his goal of crossing the 1,000 student barrier is within sight.