Poised for Growth in Virginia and Carolinas 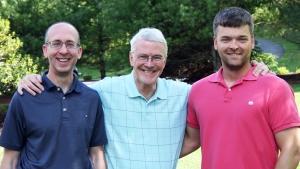 At the end of this month, InterVarsity’s longest tenured regional director will step down and the Blue Ridge region will cease to exist, except in the memory of thousands of InterVarsity students. A new era will begin that opens the way for many more students at more campuses to be reached with the gospel message.

For Blue Ridge region InterVarsity staff and students, the school year ended last month at Chapter Camp, at one of the two weeks set aside for intensive training and discipleship. Jimmy left camp not sad, but with a sense of joy and peace, thankful for the opportunities he’s had to train and disciple staff and students, and confident that the work started in the Blue Ridge will continue in Virginia and the Carolinas. “My job’s done,” he said. “It’s time for other people to carry on.”

For many staff members the parting was more emotional, knowing that next year their two regions will be holding camps separately and that they will miss what has been for them an annual reunion. The students also realized the significance of the parting and clapped endlessly. “It was kind of a sweet ending,“ Shane said.

Shane Arthur was halfway through college when a friend called him on his faux Christian faith. He decided to get serious about Christianity and therefore he jumped right into an InterVarsity small group when he returned for his third year at the University of Virginia. He quickly became involved in the chapter, attending chapter camp and Urbana 2000, and meeting regularly with his staff worker for discipleship. But when he was asked to think about joining InterVarsity staff, he wasn’t interested.

It wasn’t until Shane had worked a number of part-time jobs after graduation and began to realize how much he missed the InterVarsity community, with its emphasis on Bible study and discipleship, that the light finally went on for him. “I was out of school a full six months before I considered staff at all,” he said.

Most of his early staff years were spent at Old Dominion University in Norfolk, Virginia. Shane and his wife invested in the leaders of the small chapter. “I think it was at Old Dominion that I realized how much I love calling out leadership gifts in people who don’t recognize it in themselves,” he said.

The chapter grew significantly and was doing so well that Shane was at first reluctant to consider an area director position that opened up. But when he finally decided to take the job he was surprised to find out it was an even better fit. “I love helping people who are motivated and gifted to get better,” he said.

John Hanna grew up hearing about InterVarsity from his dad, who had been in the chapter at the University of North Carolina. He was invited to a freshman small group Bible study his first week on campus at North Carolina State and eventually became one of the chapter leaders. “I went to Chapter Camp every year while I was in college because of the way the Lord met me there,” he said.

But like Shane, John was not interested in joining InterVarsity staff when first invited either. He was planning an engineering career. Seeing how the Lord used him to disciple fellow students and hearing a strong call from God to vocational ministry at Urbana 90, however, changed his mind. “The joy and the love I had in seeing God work in other people’s lives made the difference,” he said.

John spent his formative years on staff at Appalachian State University in Boone, North Carolina. His engineering training came in handy in figuring out how to work with a leadership team of 60 students. “I set up structures that would allow me as the only staff for the chapter to have those students cared for, and also to be able to have leaders who were caring for other leaders,” he said.

Both Shane and John reflected on how much they have enjoyed being part of a team led by Jimmy Long. John described Jimmy as a great strategist for campus ministry but also a great pastor in the way he cares for the people he supervises. “Jimmy is a very empowering supervisor,” Shane said. “He creates a lot of freedom for area directors.”

Few InterVarsity regional directors have come close to serving in their role for 33 years Jimmy has in the Blue Ridge region. The number of future leaders he has helped shape would fill a college football stadium. Several years ago he calculated that more than 20,000 students have been trained at the Chapter Camps he’s served at over the 41 years he’s been on staff.  And many of these students, such as former U.S. Congressman Mike McIntyre, have told him how important InterVarsity’s leadership training was for their career success.

Jimmy’s research into how to connect with college students more effectively led to him having several books published by InterVarsity Press, including Emerging Hope in 2004 and The Leadership Jump in 2008. A strong commitment to community has also been one of the hallmarks of Jimmy’s ministry. He frequently held staff meetings in his home in Chapel Hill, which forged deep bonds among those on his team.

Characteristically, Jimmy began preparing for this leadership transition about five years ago. He is pleased that John and Shane are ready to step into their new roles. “John is a great man of God, committed to prayer and the personal development of people,” he said. “Shane is a good chapter builder, a good recruiter, and a good equipper. I have confidence that both of them will lead well and they will lead differently.”

Virginia campuses already have some of the largest InterVarsity chapters in the country but Shane is still looking for ways to reach new corners of each campus. And though twenty-four four-year campuses in the Carolinas have InterVarsity chapters, almost twice as many do not. “It’s my hope that the Lord will use InterVarsity to see more students on those 43 campuses reached with the gospel,” John said.

One of the more obvious impacts of this split of the Blue Ridge region is likely to be outreach to more campuses in Virginia and the Carolinas. As a result, the number of Area Directors is expected to double in the next few years.

In the midst of these changes, two things are certain: God will continue to be faithful and the legacy of the Blue Ridge’s 33 years will continue in the lives of InterVarsity students for many years to come.