Praying for Peace in Ukraine 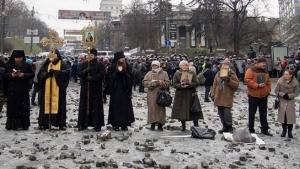 The images from street demonstrations in Ukraine are striking, particularly the images of Orthodox priests carrying crosses and standing between the demonstrators and police. One image in particular caught the attention of Bob Grahmann, now Director of InterVarsity’s Link program, and formerly a resident of Kiev, Ukraine for nine years.

The photo shows ministry colleague Denis Gorenkov, in an orange jacket and holding a Bible, standing with Orthodox priests and several women on a street strewn with rocks which had been flung at police by demonstrators. Gorenkov is general secretary of CCX, InterVarsity’s sister student movement in Ukraine through the International Fellowship of Evangelical Students (IFES).

"It's incredible to see them standing shoulder to shoulder, with their icons and a Bible,” Bob said. “It's a miracle that they would allow him to stand with them because in most Orthodox countries the Protestants are looked down upon as heretics. In any other country the Orthodox would not allow it.”

A Reason for Hope

Bob and his wife Patricia are watching with deeply mixed emotions the unfolding of events in Kiev. "I'm worried politically, because this is just a repeat of what's been happening in Ukraine over the last 400 years,” he said. “But I'm hopeful because of the spiritual depth and vision of the IFES movement in Ukraine and the effect that they can have on the country."

CCX is one of the strongest movements in IFES. The Grahmanns attribute that in part to many InterVarsity staff members who, like them, have invested years of work in Ukraine through InterVarsity’s Link program and Global Projects, along with staff from other IFES member countries who also spent time in Ukraine.

For the past ten years Denis Gorenkov has been engaged in reaching out to improve relations with the Orthodox church and developing a broader vision of Christian engagement for the Christian students he works with in Ukraine. Earlier this month he organized a meeting of evangelical leaders to discuss the current political crisis. They issued an appeal to the evangelical churches of Ukraine to take a stronger stand for peace, truth, and justice in Ukraine.

“What gives us the most joy is that as we helped to train and mentor them we also tried to help them see InterVarsity's vision for engaging the culture,” Bob said. The idea of engaging the culture conflicts with the separatist attitude that is more common in communist countries. Protestant churches could expose themselves to unwanted government attention by taking political positions.

"The character of the Ukrainian says don't make waves, don't make trouble, things will always be bad, get used to it," Patricia said. “So you know it's a big problem when 250,000 people show up to protest something the government is doing and get beat up by police."

“Hope is not a part of their culture,” Bob added. “It only comes from the gospel. The hope of the gospel has transformed them." The conflict continues in Kiev. The Grahmanns, and millions of others, are hoping and praying for peaceful resolution.

In a letter sent today, Denis Gorenkov appealed for prayers for Ukraine:

Please, pray that the government would cancel the new “totalitarian laws” as they negotiate with the opposition right now. Pray that those who are missing would be found. Pray for the police to listen to their conscience more than to the illegal orders. Pray that the bloodshed would be stopped.