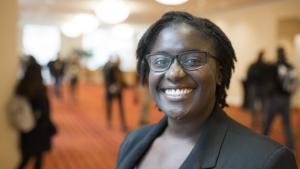 Charlene Brown, InterVarsity’s newly appointed director of Black Campus Ministries (BCM), became a Christian her first year at the University of Virginia (UVA). Like many students, she sought answers to her questions about the meaning and purpose of life, and found those answers through Christians who loved her and shared the gospel with her.

Within a year she was helping lead a ministry to Black students at UVA with 200 students, and it was challenging—too challenging. The leadership team needed help, so they reached out to other campus ministries for assistance.

“InterVarsity was the only ministry that said yes to coming alongside us and helping our student leaders to lead well,” she said. “That’s how I first got involved with InterVarsity.”

At the same time, racial incidents were increasing on the UVA campus. Charlene noticed that the only White students who cared enough to show up at the forums that followed those events were InterVarsity students. “I got to know them pretty well,” she said. Her third year at UVA, Charlene and other members of her group even began attending InterVarsity’s Shenandoah area conference.

By the time she graduated Charlene knew she wanted to be involved in ministry. “The same ways I saw God impact my life, I wanted to do that for other people,” she said. She enrolled at Duke Divinity School and moved to Durham, North Carolina. She took a job at a large church that seemed to offer a great opportunity to work for racial reconciliation. But then she discovered that the church wasn’t as ready to work through the risks of reconciliation as it thought it was.

That’s when a light went off for Charlene; she realized that college students are high risk takers and are much more open to letting God direct their lives. As she started considering campus ministry, InterVarsity staff directors Joe Ho and Shane Arthur, who had remained in contact with her, invited her to return to Virginia and work with the same group she had once helped lead as a student. It was now affiliated with InterVarsity but had shrunk to just 30 students.

Her first two years as a campus staff member went well. Her focus on discipleship and evangelism bore fruit; 19 students came to faith in the first year. The chapter grew to 100 students and helped launch a BCM conference for the region.

As students from the chapter followed her onto InterVarsity staff and became leaders, Charlene felt God calling her back to Durham, where she had put down roots. She anticipated launching BCM chapters at Duke or the University of North Carolina. But God had other plans.

Her supervisor encouraged her to consider North Carolina Central University (NCCU), one of the Historically Black Colleges and Universities (HBCUs). So one day in April of 2014 she dropped in at the NCCU admissions office to collect some information. When the lady behind the desk told her she looked a little older than the typical student Charlene admitted that she was a campus minister, and was thinking about planting a ministry on campus.

“She stood up from behind her desk and came over and hugged me,” Charlene said. “She told me, ‘We’ve been praying about something like this for a long time; we’re glad you’re here.’” Charlene also discovered that the NCCU chancellor’s son attended UVA and had been involved with the UVA chapter. The chancellor told her, “Whatever we need to do to make your ministry happen, let’s do it.”

Planting the new chapter at NCCU a year ago this past January was “amazing but also hard,” Charlene said. The eagerness of administrators and faculty to support her work led to more invitations than she could reasonably handle. Yet her attempts to develop a community of students were unfruitful through the first semester.

Her second semester, in the fall, did not start well either. She set up a Proxe Station (an artistic display designed to engage students in evangelistic conversations), but students did not want to talk. “How can you call me here when nothing is going the way it should?” she prayed. And then the wind blew her Proxe Station across a field, which seemed at first to epitomize her frustration.

But when a student picked up the Proxe Station and brought it back, they began to talk about what Charlene was doing on campus. The student surprised her by admitting, “You know, I was just praying about starting a Bible study.”

The student stayed to help with the Proxe Station, and then called four of her friends to come join them. They began to talk about how they could change the NCCU campus. “Suddenly I wasn’t the only one inviting people into God’s mission,” Charlene said. “Students understood the challenge of seeing lives changed and the campus renewed.” The chapter plant started to grow.

Leaving the ministry at NCCU to take on the national BCM leadership role has happened more quickly than Charlene anticipated. She has only been on InterVarsity staff for four years. But those who know her are not surprised.

Joe Ho, director of InterVarsity's Asian American Ministries and former Shenandoah area director, called Charlene a rare leader. “Wherever she goes, her ministry produces fruit of the highest quality, whether she is a student, pastor, or staff worker,” he said. “As a planter she typically accomplishes in a year what great staff do in two or three – and the rest of us maybe a couple times in our lifetime.”

Charlene officially becomes director of Black Campus Ministries on July 1, 2016. “We are so grateful to see her in this new role,” said Shane Arthur, InterVarsity’s area director in Eastern Virginia. “Charlene has blessed my own life through her deep desire to see lives transformed. Her partnership with me and many others has been such a huge part of the changes happening in the Blue Ridge.”

Charlene is ready to get started in her new position. “I want to see us usher in a generation of world changers who are passionate about the gospel, racial justice, and reconciliation,” she said.