The Price of Life in New York City 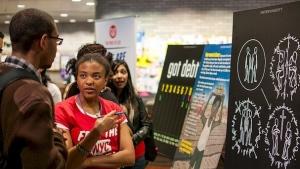 Like the autumn colors of the falling leaves, the bright red theme of InterVarsity’s Price of Life Invitational spread across the New York City landscape in early October. InterVarsity partnered with 75 diverse organizations, to hold 117 events on 17 college campuses over the two week Invitational, fighting human trafficking and sharing the gospel message.

The entire staff team of the New York/New Jersey region, along with colleagues from New England, and other staff from all over the country — around 100 in all — came to coach, encourage, pray, and train alongside the students and staff of New York City as InterVarsity mounted one of the largest evangelism outreaches in its history.

The total attendance from all of the events surpassed 12,000.* A gospel message was shared with almost 6,000 people, and 262 decisions to follow Christ were recorded. “Every day we received reports throughout the day of new people coming to faith from colleges all around the city,” said Price of Life director Dave Ruark. “Professors have invited us into their classrooms to speak about human trafficking at Baruch College, City College, and Hunter College.”

Evangelistic displays focused on human trafficking and God’s concern for justice were set up on many campuses as well as in Times Square.  At City College more than 1,000 people, five percent of the student body, were engaged in one day at the displays, called Proxe stations. Members of the InterVarsity Board of Trustees, in town for one of their regular board meetings, pitched in as volunteers at the City College Proxe station for an afternoon.

At an event held at Cooper Union the college president attended, with his whole family. At Columbia University students packed the chapel to hear a survivor of human trafficking speak. The New York Daily News reported that “Slavery exists in New York City and Christian students want to fight it.”

Friday and Saturday night, October 11th and 12th, Freedom Festivals were held at City Center theater. Attendees enjoyed and were challenged by a free concert with music and spoken word presentations from Josh Garrels,  Propaganda, Lacey Nicole Sturm, and Run River North. They heard from David Batstone, an ethics professor at the University of San Francisco, and the founder and president of Not for Sale, a human trafficking abolitionist organization. “It is not enough to do compassion work and pull people out of the river,” he said. “We must ask why they are falling into the river. That is justice work.”

They also heard from R. York Moore, National Evangelist for InterVarsity and founder of the Price of Life campaign. York has been a part of 14 Price of Life Invitationals and similar campaigns against human trafficking, since the first Price of Life Invitational was held at Michigan State in 2007. “This is the first Invitational where new Christians from student witness on the streets of the campuses outnumbered those new Christians from events where us ‘professionals’ preached,” he noted. “Students who have never been involved with InterVarsity are being brought into community, into Bible studies, and into further, deepening relationship with Christ and His people.”

Despite incredibly complicated logistics, The Price of Life survived vandalism, sabotaged emails, mockery, and opposition from school administrators. InterVarsity was also credited in a mayoral proclamation naming October “Be a Voice Month.”

The Price of Life Invitational spread beyond the campuses. Meetings were held with fashion industry leaders in SoHo and fund managers on Wall Street to discuss how their work could help bring justice to the victims of human trafficking. Professionals from many different fields, including health care, who are in positions to effect change in business and services learned about how they could impact human trafficking.

A member of a law enforcement panel was asked about his motivation for focusing on the human trafficking issue. He responded by talking about his faith in Jesus Christ and how much God cares about justice. “Through the Price of Life, we have begun to radically shift the understanding throughout the city of what it means to be Christian and the good that can come from linking arms with the Church in the fight for the common good,” York said.

Some comments from student participants:

Plans are already underway for the next Price of Life Invitational at the University of Michigan in 2014. Through the International Fellowship of Evangelical Students the Price of Life may be spreading to other countries, such as Rwanda.