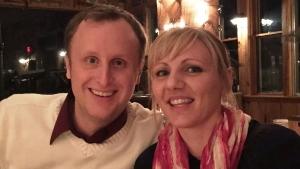 Before he even knew that InterVarsity existed, Derek DeKam knew he wanted a career that involved working with college students. “College to me was an amazing time of transformation: socially, mentally, obviously spiritually,” he said. “I love all of the changes that happen in those four years.”

Derek’s undergraduate years at Grand Valley State University (GVSU) in Michigan were exemplified by the title of one of his college papers: “My Search for Truth.” After trying church for two years in middle school, he stopped going amidst the confustion and frustration he experienced from not understanding the Bible and some critical comments from church leaders. But when he got to college, his hunger for knowing God resurfaced as he searched for answers to his questions about purpose and meaning.

At GVSU he started attending two different campus Bible studies that were not affiliated with any national ministries. His best friend joined him in his quest, and the more that he learned about Jesus the more he was captivated by the Christian faith. He also found professors who were willing to mentor him in the faith.

A week after graduation he entered graduate school at Western Michigan University (WMU) with the goal of becoming a college counselor. By then a friend had told him about InterVarsity, so he connected with the grad fellowship at WMU. InterVarsity’s Campus Staff Member at the time, Scott Erbe, discipled him. Derek learned how to study Scripture, be a small group leader, and share his faith. And that’s when he discovered what he really wanted to do.

He knew that, as an academic counselor he would be able to have a small influence on a large amount of students. But he would only be able to talk with them about Jesus if he worked on a Christian college campus. As an InterVarsity staff worker, however, he would get to meet with students regularly and mentor them, just as he had been mentored. “That seemed to be a lot more compelling to me than influencing students by just seeing them a few times a year,” Derek said.

Today, ten years after coming on staff, Derek is the area director for west Michigan, overseeing staff at both GVSU and WMU, as well as five other campuses. He and his wife Alicia, also on staff, live close to the GVSU campus, and he still meets with students. Rather than spending all his time on administration, as he feared, he’s discovered that being an area director gives him wider influence, and opportunities to develop more students in Christian discipleship and leadership. “Impacting more students and more campuses was very appealing to me,” he said.

Working in Grand Rapids, which he calls a “highly churched area,” allows Derek to reach out to students who have a Christian faith background but haven’t developed a personal relationship with Jesus. “Cultural Christians, nominal Christians, are our biggest mission field,” he said. “[We don’t] assume these people that have gone to church here or there or maybe even weekly know Jesus.”

Every year, for the past seven to eight years, the students whom Derek has been working with have become more intentional about sharing their faith as a culture of risk-taking and faith-sharing has steadily taken hold and continued to grow. But creating that culture didn’t happen until Derek and some of his students became increasingly frustrated over their fruitless evangelism efforts.

As Derek and the students spent time in prayer and fasting, humbling themselves before God, they began to see things they had missed. “We were sharing the gospel but we weren’t really inviting people to respond,” he said. “We didn’t want to offend anyone so there was no clear invitation. And we weren’t expecting that God was powerful enough that they could respond.”

At the same time, they also developed a stronger prayer foundation. “When students are faithful in prayer and faithful in taking risks, and they see God work in powerful ways, it changes their expectations and helps them be more dependent on God, and more prayerful,” Derek said.

The area team’s goal is to have 300 students make decisions to follow Jesus over a three-year period. At an area retreat recently, they celebrated 109 decisions made during the first year!

“It’s exciting to see nominal Christians come to true faith, but it’s also exciting to see those come who know nothing about Jesus,” Derek said. That includes international students. Derek is thankful for volunteers from local churches who have developed deep relationships with these students who often come to the U.S. eager to learn about Jesus.

Derek has achieved what he wanted, a job that helps students discover what he discovered in college: answers to their questions about meaning and purpose in life.