Re-envisioning the Mission Field as an Area Director 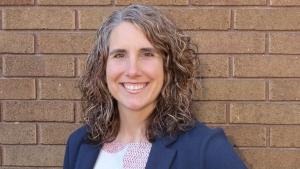 InterVarsity’s 2030 Calling got Amy Jacobsen thinking about the future. Not just about InterVarsity’s but also her own ministry future.

“My immediate context is the Southeast Wisconsin Area,” she said. “I saw a lot of growth in the eight years I was the Area Director (AD), adding chapters on three new campuses. But I see a lot more potential.”

InterVarsity currently has chapters on 9 of the 19 campuses in the Area. When she was an AD from 2008 to 2016, Amy saw those nine campuses as her mission field. But not anymore.

“The 2030 Calling—all the talk about owning every corner of every campus—helped me see the mission field in a broader way than I had previously,” Amy said. “It was compelling as I began to think of my geography in light of the new vision of the 2030 Calling, with all 19 campuses as the actual Area.”

There was just one thing. Although she still lived in the Southeast Wisconsin Area, Amy was now an Associate Regional Director. She supervised four ADs in the Lakes and Plains Region, including ADs in South Dakota and Minnesota. She traveled a lot with these supervisory obligations.

Combine all that with an upcoming vacancy in the Regional Director (RD) position, and Amy had a decision to make. Should she apply to move up the organizational ladder to RD, or back down to AD?

As a driven high achiever, it initially seemed counterintuitive to consider what might be perceived as a downward move. But Amy sought spiritual direction from people who know her well. She was pleased to find out that they saw the move back to AD as a good fit for her, her family, and the Area.

“It seems sacrificial by worldly standards, but it’s also freeing and life giving,” Amy said. “This allows me to integrate a lot of my passions and callings as I shrink the geographic territory which I’m leading, investing more deeply in staff, students, and volunteers in a certain area.”

Amy’s return to the AD role at the beginning of 2020 fits in with a critical need to fill many AD positions, according to Jason Thomas, Executive Vice President of Field Ministry.  Since the 2030 Calling was launched in July 2018 , 28 people have said yes to new AD roles. “We praise God for these new staff directors,” he said.

Also, 50 prospective ADs gathered at SC20 to hear Jason and other senior leaders describe the strategic role of Area Directors in pursuing the 2030 Calling.  At that gathering, this list of 10 critical vacancies across the country, from Alaska to Florida’s Sun Coast, was shared.

Amy is not the first InterVarsity staff to make a counterintuitive career move in order to return to ministry that’s closer to the student level. “I am invested in women leading in higher levels in InterVarsity.  In my case, I am drawn to impact Southeast Wisconsin,” she said. “It’s with the people and the places that I’ve been doing ministry with and alongside of for 20 years.”

Amy has always been compelled by the vision of the university as a mission field ever since she was a student at Carroll College (now Carroll University). She arrived on campus as a relatively new Christ follower and knew she needed to find a Christian community to grow her faith. She connected with InterVarsity right away and matured through the fellowship and discipleship of upperclassmen. During her senior year, she served as chapter president. “In college, I became a more serious disciple,” she said.

Now the 2030 Calling has given InterVarsity staff a new paradigm for ministry. “How I used to do the job is not going to be enough to get it done,” Amy said. “The 2030 Calling felt like both an invitation and a challenge to lead differently in a familiar context.”

She looks forward to working within this new paradigm, which includes finding new partners—churches, alumni, and other ministries and volunteers—who share the same dedication to reaching students and faculty with the gospel message.

Amy believes every student on all 19 campuses in her Area should have that same opportunity that she had, to find a community to help them grow in faith. Now she’s back in the best place for her to see that happen.