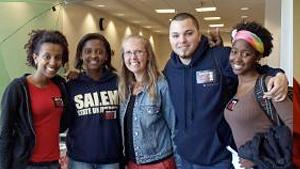 Becky Lahna’s adventure began with a prayer when she was 15.

“I’ll go anywhere you want me to go, Jesus. My life is yours now,” Becky prayed while taking communion for the first time. Having just come to faith, Becky not only knew Jesus as her Savior, but also wanted him to be Lord of her life. That day, she submitted her plans to his.

Now an InterVarsity staff member, Becky says, “He took me up on it. It’s like God said, ‘Okay, I’m going to take you on some adventures, Becky.’”

The beginning of an adventure
Throughout high school, Becky continued to grow as a disciple of Jesus. By the time she arrived at the University of Washington, Becky knew she wanted to join a campus ministry. When she first went to InterVarsity, Becky didn’t consider it a good fit and looked elsewhere. Through her experience in another ministry, Becky found a passion for working with college students.

Upon graduation, Becky felt God calling her to the University of Tennessee in Chattanooga, where she worked as an associate director of a college ministry. In her position Becky got the opportunity to do what she loved: train staff and student leaders, reach out to students, and lead Bible studies.

“I loved everything about my job. I couldn’t imagine doing anything else,” Becky said. Becky was content, settled, and could see herself in Chattanooga for a long time. But then Boston happened.

Four years into her position with her ministry, Becky unexpectedly found herself caring about Boston, a city she had never even visited. For months, Boston was on her mind. Everywhere she turned, Becky seemed to find Boston-related encounters. She bumped into a man with a Boston accent while standing in line. The Red Sox won the World Series. Boston showed up in the news at an unusual rate.

The circumstances were seemingly random, but Becky believed God was trying to tell her something. Confused by what it meant, she started praying for the city and eventually other students joined in her prayers. For months, she asked, “God, what are you saying?” only to be met with what felt like silence.

And then God answered. In 2004, Becky attended a large worship conference in Chattanooga with her students. Sitting in a gym of over 20,000 people, Becky watched an opening video with amazement as God’s message about Boston became perfectly clear. On the screen were students from Boston, saying, “Please come to Boston. The harvest is plentiful, but the workers are few.”

Becky cried as she and her students recognized this as the fulfillment of months of question-filled prayer. The video reminded Becky of the Macedonian Call in Acts 16, when Paul received a vision of a man from Macedonia begging, “Come over to Macedonia and help us.” Becky knew where the Lord was calling her next.

After finishing the school year, Becky packed everything she owned into a moving truck and moved to Boston in August 2005. She didn’t have all the details worked out, but she knew she was supposed to love college students in Boston.

“I think I’m going to Boston”

As soon as she arrived, Becky was on a mission to find the students she was called to love. But as Becky began researching churches and ministries, she didn’t find any open doors. Wherever she went, she was told that they had too many volunteers and that she wasn’t needed.

After several months of talking to random students in the area, but never making any real connections, Becky began to doubt. “Why did I even move to Boston? Did I miss God’s call?” she questioned.

One day in May, discouraged from the seemingly fruitless search, Becky asked a seminary classmate to pray with her. As the two women stood in a parking lot praying, names popped into Becky’s mind. The captain of a football team, the editor of a school newspaper, a dorm resident assistant, a campus worship leader.

As they came to mind, Becky jotted down the names of students she had met during the past few months. Later Becky realized the list included an influential student from each campus on the North Shore of Massachusetts.

A city on a hill

That same night she called the students on her list. Later that week, all of the students met in a coffee shop to pray for their campuses. As they began talking, Becky discovered that the meeting was an answer to more than just her own prayers. “One by one, students said, ‘I have been praying for that very thing. This is exactly what my campus needs,’” Becky said.

Throughout that summer, the group continued to meet together to pray and study Scripture. They decided to call themselves “The Hill,” in reference to Psalm 24 and Matthew 5:14. For four years, The Hill continued to meet, without resources, money, or any affiliation with a church or ministry.

As Becky pursued connections with churches and other ministries, she once again was met with closed doors. Meanwhile, as Becky led the fledgling ministry while working full-time at a coffee shop, she was offered multiple job opportunities with ministries outside of Boston. But Becky stayed. The Hill continued to grow as students invited friends, and other students came to faith.

In 2009, Becky was hired in the admissions office at the seminary she attended. In December of that year, the seminary sent Becky to InterVarsity’s Urbana Student Missions Conference as their representative. At Urbana, Becky found a different InterVarsity than she remembered from college.

As she attended the evening sessions, Becky realized that her vision for Boston aligned with InterVarsity’s vision. Three days into the conference, Becky approached the staff booth to learn more about InterVarsity’s presence in Boston.

When she expressed interest in working with InterVarsity, the staff representative was stunned. He was on the New England regional leadership team and, for years, his team had been praying for staff in Boston. Once again, Becky knew she was exactly where she needed to be.

Becky joined staff with InterVarsity as a planting area director in the Boston area. This past year, she supervised ministry at five schools, dividing her time among the campuses.

Being affiliated with InterVarsity allowed Becky’s ministry to establish witnessing communities on campus, where students have launched evangelistic Bible studies and other forms of campus outreach. This fall, Becky serves as area director of North Shore, equipping a team of staff to minister to students on campus.

Today, telling the story of her long journey in ministry, Becky exudes the joy of someone who has said “yes” to the Lord’s call and has committed to following him wherever he leads.

“I want to be a woman who listens to the Lord and obeys. I want to know that what he has for me is better than what I could have planned for myself. Even though it may be hard and it may be a long process, it’s worth it if it means following and serving him.”