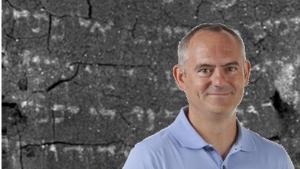 Brent Seales studied robotic navigation as a graduate student at the University of Wisconsin—Madison (UW). He was also part of an InterVarsity Bible study with other graduate students. He could not have imagined that his computer science skills would someday help decipher a text of Scripture so ancient that only the Dead Sea Scrolls are older.

When Brent arrived at the UW, he found a group of graduate students who met together to explore how their studies in the sciences, arts, humanities, and other fields aligned with their Christian faith. “InterVarsity brought me into a community interested in living that out,” he said. “And it also introduced me to faculty members who had attached themselves to the InterVarsity community for the purpose of mentoring us.”

After seeing how the UW faculty engaged with grad students, Brent knew that he wanted to commit himself to an academic career where he could continue to combine the pursuit of both a vocational and spiritual calling. Brent earned his PhD and became a professor at the University of Kentucky (UK), where he has taught computer science for the last 24 years. He’s involved in a local church and currently serves as the faculty adviser for InterVarsity’s fellowship at UK.

At Kentucky, Brent’s research field is computer imaging for digital libraries, particularly ancient manuscripts from the medieval period. He became adept at dealing with pages of old and damaged texts. But imaging those open texts was comparatively easy when he faced his next challenge: imaging texts that could be described as being similar to a cigar-shaped charcoal briquette.

Brent was part of a team of scholars working on deciphering carbonized papyrus scrolls that were archived in a villa in Herculaneum, one of the cities destroyed by the AD 79 eruption of Mt. Vesuvius. “We could see the writing but not very well, because the surface was carbonized,” he said. “The writing is black and the surface is black.”

Various wavelengths of light were considered to heighten the contrast, including infrared and X-rays. It was then that Brent wondered if the X-rays of computer tomography (CT), the technique that medical professionals use but refined for higher resolution, could actually read the scrolls without unrolling them. Then, in a further effort to heighten the contrast between the black writing and the black surface of the documents, Brent began a collaboration with physicists in Grenoble, France, using a particle accelerator.

In the meantime, Israeli officials contacted him about a carbonized text discovered decades ago in the ruins of a Byzantine synagogue at the oasis of Ein Gedi, along the shore of the Dead Sea. They had tried their own CT scan, but were unable to read the text on the scroll because they lacked the software that Brent had developed.

He never saw the scroll. Dead Sea Scrolls curator Pnina Shor handed him a disk full of data at a meeting in Los Angeles and Brent’s team went to work on it. The metal in the ink used for this document provided much better contrast than the Herculaneum scrolls. The first image wasn’t clear enough to read the text but they worked through the early summer months and by mid-July had a second image to send to Israel.

“They immediately recognized that it was the opening verses of the Old Testament book of Leviticus,” Brent explained. “It’s written in a tiny, deliberate hand. There’s a lot of text, even though it’s small.” He’s hoping the next image will have verses from the second chapter of Leviticus.

“This discovery absolutely astonished us,” said Pnina Shor at a news conference in Jerusalem. “We were certain it was just a shot in the dark but decided to try and scan the burnt scroll anyway. Now, not only can we bequeath the Dead Sea Scrolls to future generations, but also a part of the Bible from a Holy Ark of a 1,500-year-old synagogue!”

Brent was told that there are more carbonized texts in Israel waiting to be analyzed, and he suspects that ancient carbonized manuscripts have been excavated and saved from other locations. “If we can provide a method to read a rolled-up scroll, then we can support the idea that we should go back into Herculaneum and excavate the potential for other galleries and other collections that might exist that are still in the ground,” he said.

Looking back on his InterVarsity grad group, Brent is thankful for faculty members who modeled mentoring relationships with its members. That example has stayed with him for three decades and it’s an example he has tried to follow with his own students. Some of those students worked with him to help decipher the Leviticus scroll.

“I think it's a wonderful circle for me personally to see my work coming back to material that is sacred and forms the foundation of the Judeo/Christian tradition,” Brent said. “That's an alignment of faith and work that I never thought would happen to me personally and now that I see that happening it's really gratifying.”

The New Yorker also recently highlighted the work of Brent Seales and his colleagues in recovering ancient manuscripts.