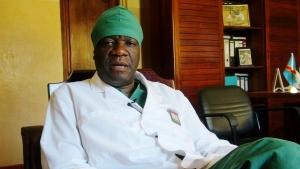 Dr. Denis Mukwege, co-winner of the Nobel Peace Prize for 2018, is a graduate of InterVarsity’s sister movement in Burundi, where he did part of his medical studies. He was awarded the Sakharov prize by the European Union in 2013 and was shortlisted for a Nobel Prize in 2016.

InterVarsity is a charter member of the International Fellowship of Evangelical Students, which formed in 1948, and later included Union des Groupes Bibliques du Burundi. IFES General Secretary Daniel Bourdanné said of Dr. Mukwege: “He is a model to me of Christian engagement in society. He selflessly brings the character of God to these broken people.”