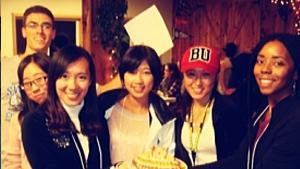 Two days after the Boston Marathon bombing, the media released the name of the third victim, Lu Lingzi, a Chinese student. As I read several articles, my heart stopped: I recognized the background of many of her photos—Toah Nipi, our camp in New Hampshire. This tragic story had suddenly become very personal.

Lingzi came to Boston University (BU) last fall as a graduate student in statistics. Her roommate, another Chinese student, was a Christian involved in our International Student Ministry (ISM) graduate student chapter. As roommates often do, she invited Lingzi to come to a weekend conference. One of our staff at BU, Tim Leary, hosted a lunch to explain the nature of the retreat to Lingzi and others.

By all accounts, Lingzi had a wonderful time that weekend. Her Facebook photos show a smiling, engaged student soaking up her surroundings. In the photo above, Lingzi is in the center (in white), with her friends at Toah Nipi last fall

Fast-forward to the night after the bombing. When Lingzi failed to return to her dorm, her roommate went from hospital to hospital. In another attempt to find Lingzi, Tim posted a prayer request for her on Facebook.

As a result of that posting, Tim received a flood of media requests to identify the third victim. Out of respect for Lingzi’s family in China — they initially had requested that her name not be made public — Tim refused to disclose her name.

In the days that followed, Tim and his wife, Sarah — also on staff — ministered to international students at BU. Sarah was particularly close to Lingzi’s roommate. Reflecting on those difficult days, Tim observed, “It was an honor to minister to students in the midst of pain.”

BU held a ceremony honoring Lingzi and her family, 1200 people participated. As a recognized BU chaplain, Tim was asked to read from the book of Revelation. By all accounts, the most moving aspect of the event was a eulogy given by Lu Jun, Lingzi’s father. Of his only child, he lamented, “She was the joy of our lives.” Afterwards, Tim handed him photos of Lingzi from the fall retreat (see below) as well as a Chinese/English New Testament.

First, as the father of two daughters who are about Lingzi’s age, my initial response has been to deeply grieve for her parents. I simply cannot imagine their pain. A month before the Boston Marathon, my eldest ran a similar event in Washington DC. Her fiancée was standing at the finish line with flowers. Had she run in Boston, her time would have put both of them very near the blasts.

Second, as president of InterVarsity, I am incredibly proud for our BU staff. Not only have they been missional in engaging international students with the Gospel, but they have also demonstrated high character by protecting a grieving family. Rather than draw media attention to themselves, they chose to honor others.

Lingzi is the face of so many Chinese students today — bright, engaging, and open. Currently, nearly 200,000 Chinese are studying in America (out of a total of 750,000 international students). Our State Department estimates that 25 percent of all of the world’s future leaders are studying in the United States right now.

International students are a very high priority for InterVarsity. One out of every nine of our students comes from abroad. As our ISM Director Lisa Espineli Chinn says, our motto is “First to Welcome.” We want all students to be recipients of our hospitality and love.

I am so thankful that our community has been part of Lingzi’s story. In her memory, may we redouble our efforts to minister to internationals through student leaders, volunteers and staff.