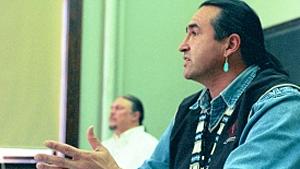 After Richard Twiss became a follower of Jesus, he dedicated his life not only to spreading the gospel but also to social justice, racial reconciliation, and indigenous leadership. He was a special friend of InterVarsity, helping train our staff in Native American ministry and participating in several Urbana Student Missions Conferences. Hence, our community was deeply saddened by his death, at the age of 58, on February 9, 2013, following a heart attack in Washington DC.

“This is a profound loss for the Kingdom,” lamented Alec Hill, InterVarsity’s president. “Richard was one of those rare souls; he touched a deep chord in so many of us. His joy, wisdom, and kindness made a deep impact. Our love goes to Katherine and the family.”

Paula Fuller, InterVarsity's Vice President of Multiethnic Ministries, said of Richard, "He was a partner and friend who journeyed faithfully with us, and contributed greatly to InterVarsity’s multiethnic development."

Richard identified himself as a Lakota follower of the Jesus Way. He founded Wiconi International, using the Lakota word for “life,” dedicated to bringing the abundant life of Jesus Christ to Native Americans. “Our goal in our ministry is not only to see native people come to faith, but to experience the abundant life Jesus spoke of in John 10:10,” he said in a 2001 video interview with InterVarsity’s Twentyonehundred Productions.

Richard spoke proudly of the unique role that indigenous Americans can have in ministry. “Today we are the most widely known people group on the face of the earth,” he said. “There’s no other people group that’s so uniquely positioned for world evangelization as First Nations people are today because of our culture.”

Richard traveled the world, sharing his culture and his faith in Jesus Christ, experiencing opportunities to witness to Jesus in settings that would have been hostile to most other American Christians. “They don’t see me as an American,” he said. “Native people have their own unique, distinct identity.”

The Way to Urbana

InterVarsity staff members Brenda Wong and Moani Sitch first met Richard at the World Christian Gathering on Indigenous Peoples in Australia in January 2000. Through that contact, Richard was invited to our Urbana Student Missions Conferences, leading seminars on contextualizing faith in Native American culture, and worshipping along with other Native American Christians in full regalia before the thousands of Urbana participants. 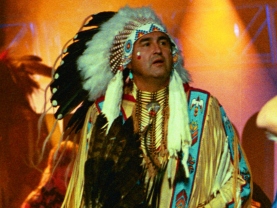 “Richard's relationship with us has transformed our perspectives and experiences in what a mutual partnership with Native American brothers and sisters can bring,” said Brenda. Their gifts and prophetic teaching are bringing refreshing streams of life to InterVarsity and God's kingdom. I was transformed as I embraced our native brothers and sisters, their pain and their gifts, and received powerful ministry from Richard and our native family.”

Moani added: "Richard's fearlessness to speak truth in love from a Native perspective coupled with his humility and humor made for a powerful reception of truth in the hearts of Natives and non-Natives alike, followers of the Jesus Way and those yet deciding their way."

“Richard will be greatly missed by Urbana, as well as the North American missions community,” said Tom Lin, InterVarsity’s Vice President of Missions and Director of Urbana. “He was a dear friend who taught us, served alongside us, and was committed to catalyzing the next generation in their cross-cultural missions journey.”

"When I first met him, I was terribly intimidated by him," Willie said. "Not only was he brilliant and willing to challenge everything I ever thought I knew about God and the Bible, he was 6-foot-5 with a booming voice. But the first time he teased me, I knew I was okay. I will always remember him for his earthy, often surprising sense of humor."

Megan added, "As I think about Richard, I am struck by the sense that he was never trying to be anything other than who God made him to be. In the Southwest where we work, Native contextualization of the gospel is very controversial. But Richard never shied away. And he encouraged us that we were doing the right thing."

Rick Demarest, an InterVarsity Campus Staff Member in South Dakota, remembers many conversations about reaching Native Americans with the gospel. “I found it very easy to be with Richard,” Rick said. "He loved Jesus and Native peoples. I could tell he cared deeply for his family in South Dakota. His leadership in the church will be missed.”

Richard wrote several books – including: One Church Many Tribes - Following Jesus the Way God Made You — as well as thoughtful articles on contextualized ministry.  Most recently he served as an adjunct professor at Portland State University, teaching the course, "Native American Religion and the Sacred."

His official obituary is posted on the Wiconi International Facebook page. A Celebration of Life service will be held for Richard Twiss on Sunday, March 10, 2013.