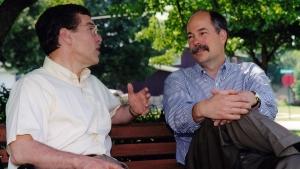 Steve Hayner, former president of InterVarsity Christian Fellowship, and most recently the president of Columbia Theological Seminary in Georgia, passed away on Saturday, January 31, 2015, after a nearly year-long battle with pancreatic cancer. He was 66 years old.

Steve became president of InterVarsity Christian Fellowship in 1988, near the end of a turbulent decade in which InterVarsity had five presidents. “Steve brought pastoral care, healing and hope to a community that had undergone much trauma,” said Alec Hill, Steve’s successor and InterVarsity’s current president.

Both Steve and Alec came to InterVarsity from Seattle Pacific University — Steve had been  Vice President of Student Affairs and Alec had been Dean of the School of Business and Economics. They had been friends, attended the same church, and even co-led small groups of students together. (Photo above, Steve Hayner and Alec Hill in 2001)

“When Steve was thinking of leaving InterVarsity, he contacted me regarding my possible interest in succeeding him,” Alec recalled. “Once I became president, he fully supported my leadership. When I ran into bumpy situations, I would often call him for advice. Once—at my request—he stepped into an old situation that needing addressing. He didn’t have to do that. Steve is one of the kindest and most authentic people I’ve ever known.”

Barney Ford, former executive vice president, was Steve’s closest associate on staff and remembers well that InterVarsity was in need of a firm but gentle leader when Steve arrived.

“He chose to say yes to a ministry that in the preceding seven years had experienced great difficulty and was not in good shape,” Barney said. “Steve brought great gifts to InterVarsity through his pastor’s heart, intellectual brilliance, love of students and the university and servant leadership. Some of those gifts included personal and relational healing for a great many staff, steady high-quality leadership that created greater trust and focus for the ministry, and a strong and healthy board of trustees.”

Barney said that InterVarsity’s Urbana Student Missions Conferences, InterVarsity Press, national training facilities, and campus ministries were all strengthened under Steve’s leadership. “When Steve elected to bring his ministry with InterVarsity to a close in 2001 it was as one of the most loved and respected leaders in the organization’s sixty year history,” he said.

“He was quick to apologize and slow to attack,” Jim said. “His love for God came through in the way he taught the Scriptures and in the way he walked what he taught. When he left we were poised for a season of growth and advancement in our work with students and faculty. He united us around our purpose and mission to the campus, and all the growth we have experienced in the last decade stands on Steve’s shoulders.”

Judy Johnson was conference director for the staff conference that drafted InterVarsity’s Purpose Statement. “The part Steve stressed, and that would not have been there without him, was the preamble: ‘In response to God’s love, grace, and truth.’ That is how Steve saw his life” she said. “He was strong in teaching us that our purpose isn’t about what we bring and own but what we do because God has initiated with us and poured out his love, grace, and truth into our lives and our movement.  It was important to him that we deeply believe that and minister out of that posture.”

Bob Fryling, the publisher of InterVarsity Press, remembers Steve as not just a president but as a pastor, teacher, and friend who provided rich biblical counsel, theological depth, and relational integrity. “Steve was never as interested in the trappings of leadership as he was in encouraging and supporting others in their leadership development,” Bob said. “He was a mentor and friend to so many throughout InterVarsity. I particularly enjoyed talking with him about books and ideas and Scripture and how they all related to both our personal lives and the work of God through us and others. Steve had a wonderfully bright and generous spirit and I am tremendously grateful for his part in my life."

Long time InterVarsity staff member Jeanette Yep was part of a three member staff committee that interviewed Steve and his wife Sharol when Steve was applying for the president’s job. They had pages of questions which they had gathered from staff from around the country. “Steve answered each question, thoughtfully and truthfully, letting us know when he wasn’t sure and answering with conviction if he was,” she said. “As Steve got to know people, he had an uncanny ability to see our strengths and our potential. He would speak into our lives with pastoral clarity and kind authority.”

Jeanette recalled that one of Steve’s great gifts was his ability to keep diverse people working together in unity. “He was good at defining the edges and then working hard to have people listen respectfully to one another’s perspectives,” she said. “We were held together by InterVarsity’s doctrinal statement and a deep and abiding commitment to see students won to Christ in the university. Steve provided leadership that allowed the staff and students of InterVarsity to become increasingly multiethnic and thus more accurately reflect the ethnic diversity of the university world.”

“Finally,” she said, “Steve had a gift to make those he met feel special. This was an intangible ‘soft’ leadership skill, but what a gift to a movement filled with younger, often insecure and hurting staff members and students. He helped us embrace our brokenness, trusting God our great healer to restore and redeem us so we would look more like Christ.”

Karen Mains was invited by Steve to become the first woman chairperson of InterVarsity's board of trustees. It was, she recalled, the last thing on earth she wanted to do. But it became one of the better acts of obedience she exercised in her whole life.

"Some of the reason for that is the journey that Steve and I took hacking out what it looked like for the president of a well-known evangelical organization and a woman chair to work together to create a model infrequently (or never) employed that displayed the holy dynamic of how men and women of equal strengths could show forth the full nature of God.

"Meeting face-to-face once a month in addition to a weekly phone call gave us (man and woman) enough time to take a measure of one another’s character, disposition, response to stress and crisis, godliness in word and practice, vulnerability and authenticity. For those who have never had the opportunity to establish a similar cross-gender working relationship such as this, they have also missed the rare and beautiful opportunity to step into a trusting and mutually affirming spiritual friendship.

"Others will more aptly tell the extraordinary qualities of this rare man, but I can affirm that Steve’s exercise of holiness in inviting me, an evangelical woman (who couldn’t read a financial statement) to walk beside Inter Varsity leadership was unparalleled in my life, healing to me on the deepest of levels. I am still filled with joyful laughter as I think back upon it."

As a student, Steve was president of the InterVarsity Christian Fellowship chapter at Whitman College (Washington) and was invited to join InterVarsity staff when he graduated. Instead he opted for graduate school at Harvard and Gordon-Conwell Theological Seminary, but he was never far from InterVarsity and student ministry. He joined the staff of University Presbyterian Church in Seattle, working in student ministry and leading groups of students to InterVarsity’s Urbana Student Missions Conferences. Later he served as vice president for student affairs at Seattle Pacific University, the position he held when he was recruited to become InterVarsity’s president.

His commitment to the whole campus as a mission field was reflected in his statement, “The university is not just a fishing pond to take fish out; InterVarsity is concerned about the nutrients and the pollutants in the pond as well.”

“I learned SO much from him about my strengths, my gifts, servant leadership, and trust,” Alex said. “He helped me to create an in-house urban leadership training program for developing our folks. Steve’s brilliance is only eclipsed by his humility! I’m a better man because of my accountability to Steve and his love for me.”

After a short transition in these pastoral roles, Steve moved to Atlanta where, in 2003, he became the  Peachtree Professor of Evangelism and Church Growth at Columbia Theological Seminary. In 2009 he became president of the seminary. 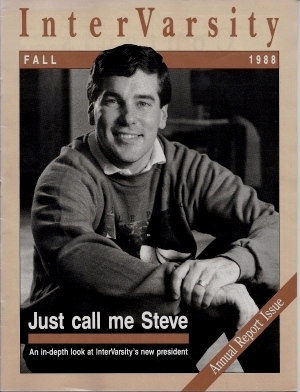 In a 1988 article introducing Steve to the InterVarsity community, he said, “I tell God I don’t care if I’m ever great. But if I have the privilege of touching people who can be, I’ll be a happy man.” Steve touched a great many people and the outpouring of affection for him since his battle with cancer became known has been effusive, on the “Thanks to you, Steve” web page, on Facebook, on Caring Bridge, in magazines such as The Presbyterian Outlook, The Christian Century, Commentary, Leadership Journal, and elsewhere. Christianity Today published an interview with Steve from last fall by Fuller Seminary president Mark Labberton. Steve was also remembered for his volunteer work with other ministries, such as World Vision and International Justice Mission.

If you would like to donate to InterVarsity's Steve Hayner Memorial Fund, you can do so here.

A service celebrating Steve's life will be held at Peachtree Presbyterian Church in Atlanta on February 23, 2015. More on Steve’s life, the impact of his ministry, and funeral arrangements, at the Columbia Seminary web page.

We rejoice in all that God has done through the life and ministry of his servant, Steve Hayner. We are sad because we miss him, and we rejoice in God’s promise of eternal life.