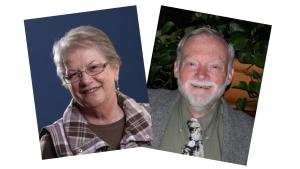 InterVarsity is saying good-bye to two key staff whose lengthy service to campus ministry includes work among university students in the US and, through the International Fellowship of Evangelical Students (IFES), in Latin America.

Marilyn Stewart, who advised and counseled multitudes of staff during more than a half century of ministry with her husband Doug, passed on to her eternal reward on Saturday, December 1, 2018. She was 77.

Bill McConnell, spent fifteen years in Brazil before returning to the U.S. and serving at InterVarsity’s National Service Center.  He died on November 28, 2018. He was 77 years old.

Marilyn was first introduced to InterVarsity while a nursing student at Jackson Memorial Hospital School of Nursing in Miami, Florida, when she became involved with Nurses Christian Fellowship. She attended URBANA 61, InterVarsity’s triennial student missions conference, and followed up with a four-week missionary training camp the following summer.

She met her husband, Doug, through InterVarsity. They married in 1964 with a shared vision of doing student work overseas. They spent their first two years of marriage in Bolivia studying Spanish, then moved to Buenos Aires.

It was a tumultuous time in Latin America, with many uprisings against oppressive governments. But it was also a time of fruitful ministry among students and through their church. “There were many people becoming Christians,” she said in a 2013 interview. “It was a wonderful time.”

They returned to the States in 1971 for Doug to attend Trinity International Divinity School. Then Doug and Marilyn were invited to Mexico by Compa, the Mexican IFES movement, where they did student work for the next 21 years.

Missionaries were frowned upon by the Mexican government. Doug and Marilyn’s job was described as helping Christian students to understand their faith, and to practice it. “We never talked about being missionaries,” Marilyn recalled. “Our girls did not know we were missionaries until we were sitting in a church in North Carolina, and they introduced us as missionaries.”

After two more decades in Mexico, Doug and Marilyn were invited to return to InterVarsity in the U.S. when there was a need for more senior staff. Marilyn served in many capacities from then on, including organizing retreats, providing spiritual direction, being Chaplain for leadership teams, and working in spiritual formation.

Bill McConnell signed up for an InterVarsity Bible study his first week on campus at the University of Colorado Boulder. He was chapter president as a junior, and joined InterVarsity staff in 1966 while attending Denver Seminary.

After six years working with US college students, first based Albuquerque and then in St. Louis, Bill and his wife Beth began to consider working overseas with the International Fellowship of Evangelical Students (IFES).

Relations between InterVarsity and IFES were not as strong then as they are today. However, after conferring with Doug Stewart, who was already working in Latin America, Bill and Beth were invited to join ABU in Brazil.

“We thought we were going for just five years to help train some new staff workers for the country, but it turned out to be fifteen,” he said. “The quality of people in IFES around the world is just fantastic. And to be counted one of them was an honor to me.”

While in Brazil he played a key role in launching ABU Editora, the publishing arm of the IFES movement in that country.

When he returned to the U.S. in 1987, he expected to work in the Missions Department to help strengthen InterVarsity’s ties to other IFES movements. But personnel shifts closed that door and Bill probably would have left InterVarsity if not for another timely visit from longtime friends Doug and Marilyn Stewart. “They listened to me until three in the morning, prayed with me, and ministered to me,” he said. “It was a God's gift at a time when I needed it.

Instead, Bill found a job in the Executive Office, helping Steve Hayner with his communications. That included dealing with hate mail. “That was a role I really enjoyed,” he said later. “It was an opportunity to explain our mission.”