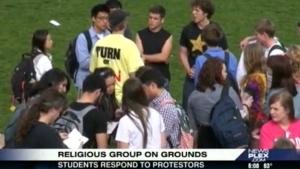 When gospel preachers showed up on the University of Virginia (UVA) Charlottesville campus wearing T-shirts that said “Turn or Burn,” students resisted the message and protested, attracting a local TV station. And InterVarsity students attempted to mediate with a gospel message that expressed Jesus’ love for the campus community.

"We were agreeing on some things but then on some things we just weren't seeing eye to eye. A lot of the things she was saying I don't believe lined up scripturally," said one InterVarsity student, Anne Moenning. "As Christians, we believe that the Bible is the inspired word of God, and I think what they were doing was picking and choosing some verses to kind of prop up their beliefs, which I don't believe in."

The UVA InterVarsity students have a different way of sharing their faith with fellow students, using open-air displays called Proxe Stations, which are designed to initiate conversations that can lead to thoughtful reflection and repentance. In fact, a Proxe Station was going on at almost the same time, just a short distance from the amphitheater.  Students who had been leading the Proxe Station moved to the amphitheater and talked with other students about their reaction to the campus visitors. The InterVarsity students invited many of their fellow students to attend an evangelistic meeting that was scheduled for later that evening.

InterVarsity’s Virginia Area Director Derek Mondeau was pleased to see the InterVarsity students responding in such a positive manner to the difficult situation, using it in a way that he thought more clearly presented the gospel message and led to opportunities for more discussion.

“I was so proud of our students owning the moment, owning the reality of repentance in the Christian story,” Derek said, “but also owning the reality that the Bible's story doesn't end at Revelation 20, in fire and brimstone and the lake of fire. It ends with Revelation 21-22 and the tender beauty of new creation as Jesus makes all things new.”

InterVarsity national evangelist York Moore stresses that InterVarsity’s ministry to students is committed to both love and truth. “InterVarsity seeks to be a voice for reasonable faith,” he said. “We reject the harsh rhetoric. We believe that there is a starting point, a common ground in a pluralistic society where those with incredible differences can come together to begin a conversation that could lead to a conversion.”

Repentance, led by the Holy Spirit, is necessary for conversion. InterVarsity believes that meeting students where they live, on their level, opens the door to the work of the Spirit. We love the campus and will continue to proclaim Jesus’ love for faculty and students throughout the 2014-2015 school year and beyond.