Returning to Campus with a New Mission 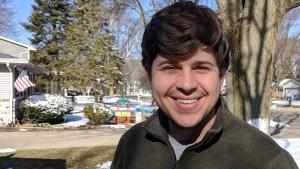 Ross Allen was in a panic. His Washington, D.C. summer internship was ending and job prospects that he anticipated had suddenly evaporated. As he prayed for direction, the word that kept popping up was InterVarsity.

When he was in college at Kansas State University there had been no InterVarsity chapter, and he had drifted between the other Christian fellowship options on campus. He had read some InterVarsity Press books, but he knew little about the campus ministry.

Then a note from a local InterVarsity chapter that his agency had worked with ended up on his desk by mistake. At the church he attended, an InterVarsity staff minister made an announcement about a need for volunteers. And then, he was listening to a podcast from pastor Tim Keller, who talked about his conversion in college through the ministry of InterVarsity.

A light blinked on in Ross’s mind. He went to the InterVarsity website and liked what he saw there. “The values of ethnic reconciliation and discipleship of the mind were drawing me,” he said. Then he clicked on the link to employment opportunities and noted that InterVarsity had an opening at his alma mater. “I was struck immediately by the vision of planting a reconciling community at K-State,” he said.

Though there were Christian groups on campus when he was a student, he knew a lot of communities on campus weren’t being reached.  His most significant spiritual experience of his time on campus came through the informal Bible study and prayer group he had led at his fraternity. After praying about campus ministry for several days, he decided to send an email to Timothy Lin, the Area Director at that time.

Tim liked Ross’s passion for seeing InterVarsity planted at K-State but was wary of Ross’s lack of formal campus ministry leadership experience. “He politely told me, ‘No,’” Ross recalled.

Ross was stunned. But he didn’t give up. His brother suggested, “If you feel this is from God, just move back to campus, work in a coffee shop or something, and tell him that you will volunteer.” His willingness to volunteer finally showed Tim that he was committed to ministry.

A few weeks later, Ross flew into the Kansas City airport at 1:00 a.m. Tim and Jamie Ladipo, then a Campus Staff Minister at the University of Kansas, were there to meet him.

“The Lord clearly called Ross to InterVarsity because he was willing to join us as a volunteer staff at another campus for a year,” Tim said. “During that year, Jamie invested in his leadership and life, helping him process the post-graduate transition and learn the InterVarsity culture. When it became clear that the Holy Spirit was calling him back to K-State, we gladly sent him later that year.”

Returning to his alma mater as a Campus Staff Minister felt like coming home in one sense, and very strange in another sense. He was navigating a familiar campus culture in a different context. But his sense of God’s presence and the drive toward a shared mission encouraged him. He was also encouraged by his younger brother and sister, who were still students and partnering with him, plus a core of committed students who immediately caught the vision of the new chapter plant.

Tim said that he was inspired by Ross’s commitment to reaching every corner of the campus with the gospel. “On a conservative, rural state campus, Ross has chosen to plant a chapter that regularly takes a stand against racial injustice and oppression,” he said. “Ross has pursued ministry opportunities in various ethnic and international corners, departments, artists, Greek life, and the LGBTQ community. He is renewing the campus and creating spaces for students from every corner of campus to seek Jesus!”

When K-State was dealing with racial hate incidents at the beginning of the fall 2017 semester, the fellowship came together to support the Black Student Union with a listening session to clear the air. “People experienced God in a fresh way,” Ross said. “It wasn’t easy and we didn’t do it perfectly, but it was a way forward.”

Looking back on his own experience as a K-State undergraduate, Ross can see how he spent a lot of time trying to find a spiritual home. “I never really found what I was looking for,” he said. Now, as a Campus Staff Minister, he is glad to be able to help students find their spiritual moorings. “InterVarsity has pressed me to challenge the assumptions that I had and think more openly about the different ways that people follow Jesus,” he said.