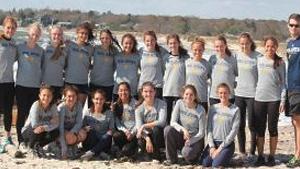 Fidgeting nervously, Lauren stood before a crowd of 40 student athletes—including her cross country teammates, half the soccer squad, and others at The College of New Jersey (TCNJ). It was the first time she would share parts of her story aloud. Reciting to herself the words of Psalm 28:7, “The Lord is my strength and shield,” Lauren took a deep breath and began.

As a child, Lauren endured sexual abuse, and feelings of shame and brokenness continued to color her life. When she entered college, she sought to cover her pain with relationships, parties, and TCNJ’s track and cross country team. Occasionally, guilt drove her to attend church. “These things didn’t make me happy, but it filled a void in my life,” said Lauren.

Last fall, an injury limited Lauren’s ability to run. With her extra time, she attended an InterVarsity small group Bible study for athletes, led by her team captain. Intrigued, Lauren continued to come each week and began going to church more often. “I realized I wanted this other life, this new life I saw in the Bible. I needed God,” said Lauren.

She met with Christine Loesser, an InterVarsity staff member and assistant coach for Lauren’s team. Christine explained that God could fill the void in Lauren’s life and take her shame away.  Right there, Lauren prayed to give her life to God.

“I felt myself washed away of all this dirt,” Lauren told the student athletes. She ended her testimony, urging students to accept God’s gift of grace so that their hearts and minds would also be renewed.  “I’m more at peace now,” said Lauren. “All my desires for those other things that filled the void—they’ve gone away.”

Later that evening, the athletes were invited to fill out a card, indicating where they were in their spiritual journey. Nine students expressed a desire to invite God into their life for the first time.

One of those nine athletes, Julie, is also senior on the cross country team. After hearing Lauren’s story, Julie asked to meet with Christine. Julie had gone to church with her family before college, but she knew she didn’t have the relationship with Jesus that Lauren talked about.

Julie told Christine that during practice, she grew quickly angry with some of her teammates, and that bothered her because she knew the Bible said to love your neighbor. She realized the sin in her heart, and with Christine’s guidance, Julie prayed to turn from her sin and follow Jesus.

Christine and Lauren are celebrating these new lives among athletes. For several years, little ministry had happened among student athletes. But this fall, 70% of the cross country team’s freshmen came to InterVarsity’s Fall Conference and 50 athletes have been attending the weekly meetings, many of them non-Christians.

“We’re building foundations, so that across the board, they know who God is and why he wants to be in a relationship with them,” said Lauren.

Christine said, “Much of this growth is due to the transformation we’ve seen in athletes like Lauren, which is changing the culture on the cross country team. Lauren’s now using her story to share the gospel in an athletic context, and God is drawing athletes to himself!”

Though Lauren’s past has been hard, she chooses to focus on the present. “I don’t think people should focus on why things happen—it will make you go crazy. If through my experience I can help someone, that’s enough for me,” said Lauren. “God is my new strength and hope.”