Running to God: A Glimpse of God’s Work at the University of Kansas | InterVarsity
Skip to main content
News
By Lisa Rieck

Running to God: A Glimpse of God’s Work at the University of Kansas 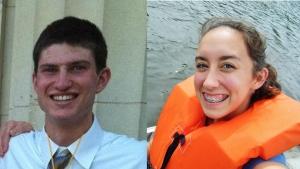 University of Kansas sophomore Julia Dury has been running competitively for six years now. “Running gives you a lot of time to think and pray,” she enthusiastically explained. “And things seem a lot more beautiful when you’re running. You’re out in creation seeing sunrises and sunsets.”

God’s work in Julia through her running has itself been beautiful to see. Though she’d attended church since sixth grade, she became more intentional about her faith during her sophomore year of high school. “It got really real then,” she said. “I wanted to be serious about it.” And she was. She started a Bible study for friends on her cross-country team—a study that she continued this past summer, even though she’d been away at college for the year.

So it’s perhaps no surprise that, when she arrived at the University of Kansas as a freshman cross-country recruit last fall, she found more opportunities to develop new friendships and live out her faith through her running. “You build relationships with teammates because you’re out running for so long,” she explained.

One of the teammates she got to know was Ben, another freshman who was also in Julia’s economics class. In addition to seeing each other at cross-country practices and meets as well as in class, the two would often study together. Their study sessions provided plenty of time and space for conversations about running, life, and faith.

As they talked, Julia found out that Ben had attended a Jesuit school and was raised in a Lutheran church. But faith in Jesus didn’t seem to be a core part of his college life. He was, however, really open to talking about spiritual things, often initiating the conversations himself. “I saw God continue to plant a seed of curiosity,” Julia said. “He kept asking questions and we kept having conversations.”

One day, when Julia mentioned that she was going to a Bible study later, he offhandedly remarked that he used to be involved in Bible studies too. Julia took the opportunity to invite him to study the Bible with her. “You get really afraid that when you bring those things up, people are going to say no,” she said. But Ben—like her high school cross-country teammates—said yes. Looking back on it, Julia said, “He was really willing. He just needed someone to mention it.”

For their first study, they looked at Luke 5:1-12, where Jesus asks people to drop everything and follow him. “We talked about what that really meant,” Julia said. And they kept meeting. Ben also started going with Julia to her small group Bible study.

After several weeks of studying Scripture, Ben decided that he wanted to follow Jesus fully and intentionally in the way that Luke 5 was talking about. “We had really good prayer together,” Julia recalled, “and he asked God to become more real and more of a priority in his life.”

God has continued to answer Ben’s prayer of surrender, including during the summer months while he was away from InterVarsity friends. The few texts he and Julia exchanged over the summer indicated that he was excited to come back to campus and live out his faith in intentional ways.

Upon arriving on campus for this new school year, he did just that, actively participating in the chapter’s New Student Outreach (NSO) events. “Ben was incredible during NSO,” Julia said. “He was amazing to have. He didn’t have to go to people; people were coming to him. And they responded so well to him.”

Ben’s surrender to Jesus last year is a small picture of the big work God is doing on their campus. During NSO in this new school year, the University of Kansas InterVarsity chapter—just in its second year—received 150 contact cards from students who wanted InterVarsity to follow up with them. That’s 10 times the number of names they received last year! “God is ready to do something and grow it,” Julia said. “We have people who are so excited and who work together really well. Big things can happen this year.”

And, thanks to God’s work in Ben through Julia, they’ll both be a part of it.