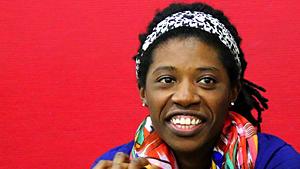 Though we often think in linear ways about our lives or career paths, our God is eternal, and his ways are not our ways. Thankfully Jesus has more for us than our own small dreams and plans.

InterVarsity Link staff member Nia Marsh has been learning this lesson through her transition from a career as a costumer and wardrobe supervisor working in theater to ministry with students through the Groupes Bibliques Universitaires(GBU) in Paris, France.

As a student at North Texas University, Nia studied fashion and costume design. After college she secured a job in Boston creating costumes for theater and opera productions. “I loved getting to see world-class performances in the dress rehearsals after we had worked to create costumes,” she said. “Some of my favorites were Madame Butterfly and The Magic Flute.”

The job enabled her to tour New England with a theater troupe as a wardrobe supervisor, making sure all the costumes were performance-ready. The job provided plenty of opportunities to grow in both her craft and life skills. “Working with actors teaches you to be adaptable,” Nia shared. “If you can work with actors, you can work with anyone.”

She already had some experience in adaptability, due to her father’s job in the military. Living in multiple cities in the U.S. as well as in Germany while she was growing up, Nia was exposed to diverse cultures, people, and languages.

So it’s perhaps not surprising that, after working in Boston for a number of years, she wanted to see more of the world. A new job as a wardrobe technician landed her nearly 8,000 miles from New England in Macau, a city south of Hong Kong in China, where she was able to keep doing work she loved.

But God had a surprise for her. French speakers in the theater there reignited in her another love that had begun in high school: a passion for the language and culture of France. Nia began to contemplate and pray about moving to France to study the language. “It was a difficult and scary decision to leave a great-paying job to move to France to become more fluent as a French speaker,” she said. “I knew I wanted to step away from working in the theater but I wasn’t sure what to do. So I prayed and trusted God to lead the way.” And he did: Nia was on her way to France.

Surprised by Love in France

Though she didn’t know anyone in the city of Nantes in western France, that was where Nia decided to settle to immerse herself in the language. Once there she found a church with a young adults group and began developing friendships. Over time she learned that many of the people involved in the group were part of GBU, which has chapters throughout France and, like the InterVarsity chapter Nia had been a part of while in college, is part of the International Fellowship of Evangelical Students (IFES). IFES has movements in 150 countries across the world and serves over 500,000 students, helping them engage the university with the gospel and shape culture in their cities and countries.

As Nia developed relationships with students in Nantes, she began to envision life as a campus staff member helping students meet Jesus through the GBU. InterVarsity Link, a program to connect InterVarsity alumni to serve in IFES movements around the world, seemed like a perfect fit. And the more time she spent with students, the more eager she became to make it her full-time job.

Working in student ministry is seemingly a vast departure from creating costumes for opera performers. But once Nia was on staff with Link, working with GBU students in Paris, she discovered that many of the things she learned from working in the theater world served her well in cross-cultural missions. Qualities like persistence, adaptability, a willingness to try new things, and an ability to solve problems quickly and creatively—qualities important for every Link staff member—have made Nia both flexible and bold in sharing Jesus with others. “Every day is different on campus,” Nia said. “I spend time praying with students and helping them discover what God is doing in their lives.”

Another similarity between the theater world and Nia’s ministry with the GBU is the importance and effectiveness of relational evangelism. It has been key in reaching students in France. “I was amazed to see how persistent students were in reaching their friends on campus,” she said. “In France, sharing Jesus comes from a relationship you invest in over time. Students invite their friends who aren’t Christians to come to small group Bible studies, apologetics nights, or prayer meetings.”

The Art of Discernment

It can often be difficult to discern how God is leading us, but Nia’s willingness to listen to Jesus as well as pursue opportunities and take risks connected her with work she loves. “I love seeing students discover who God is,” she said. “It inspires me to know God more.”

She’s grateful for the ways her friends and church community supported her and prayed for her as well while she was discerning God’s call on her life. “It’s often in recognizing the desires God gives us that he leads us into discovering how he wants to use us to serve others,” Nia reflected. “Though we might not [be able to] make sense of how God could use a work or life background that doesn’t seem to connect with student ministry, he is able to use everything he’s given us—experiences, relationships, interests, and passions—for his kingdom.”

Perhaps you or someone you know has had a growing curiosity about a country or people group and, like Nia, wants to explore what God might be doing through that desire.  InterVarsity Link can help you connect with the hundreds of opportunities to serve students across the world that are available with IFES. Learn more at the InterVarsity Link website and contact us today!