Seeking out the Underserved 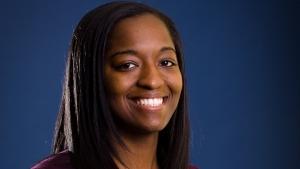 No way was Shaylen Jackson going to be able to go to an InterVarsity conference in the middle of basketball season. Shaylen was a scholarship athlete on the Western Michigan University (WMU) basketball team and the Black Campus Ministry conference was being held in Atlanta in December 2005. Shaylen had already missed several weeks of basketball as a member of the volleyball team.

But Shaylen’s InterVarsity staff member, who worked with the Collegiate, Black, and Christian chapter at WMU, encouraged her to at least pray about going to the conference. “So I prayed about it,” Shaylen said. “And the more I prayed about it, the more I felt like the Lord was leading me to go to this thing even if it didn’t make sense.”

She went to her coach, convinced he would not let her go to the conference. But he said, “If you feel like that’s what the Lord is telling you, then you should go.”

At the conference Shaylen had the opportunity to talk with students from campuses across the country. Some were the lone student representing their campus at the conference. Others told her that there was no one ministering to black students on their campus. And God began to speak to her some more. “I realized the gift I had been given to be a part of the black community at Western Michigan and recognized that not everybody has that opportunity,” she said.

Through her experience in Atlanta in 2005, and at InterVarsity’s Urbana Student Missions Conference in St. Louis in 2006, Shaylen was called to join InterVarsity’s staff. She is passionate about campus ministry because of the way it transformed her life. “Once I got involved with Bible studies with InterVarsity, I felt like it was one of the highlights of my week because of how God was changing me and what he was doing in my small group,” she said.

Shaylen joined the Collegiate, Black, and Christian chapter as a WMU junior, after spotting a poster about the group. “I thought, ‘Well I’m all those things, so I should go check it out.’” But even though she had grown up in the church, she had never studied the Bible on her own. “That kind of revolutionized the way I saw God and my relationship with Him,” she said.

Shaylen spent two years after graduation working with InterVarsity at WMU, and loving it. But her former volleyball coach, who had been hired at Michigan State (MSU), invited Shaylen to move to Lansing and join her MSU coaching staff. Shaylen didn’t think God wanted her to leave WMU, where the ministry was going well, so she declined the offer.

The offer came again. She decided to pray about it, sure the answer would be no. Instead she got a “yes.” Shaylen said, “I think God used the volleyball position to shake me out of Kalamazoo, which is where I grew up, and move me to Lansing.”

From WMU to MSU

Shaylen left WMU, but she didn’t leave InterVarsity. She kept connected as a part-time Campus Staff Member while she worked for the MSU athletic department for three years. “I was coaching volleyball, going to graduate school, meeting students, and doing Bible studies,” she said.

As Shaylen then returned to fulltime status with InterVarsity, she has become a chapter planter at MSU. She started working with undergraduate black students, then added graduate students, and is now also working with Latino students. She is driven by the vision of sharing with MSU students the transforming campus ministry she experienced at WMU, particularly Bible study.

The planting didn’t start out smoothly though. On staff at WMU, she had been part of a well-coordinated team. “But planting is just you, you do everything,” she said. On top of that, the students she was dealing with at first had more of a consumer’s mentality than a missional perspective. “They just wanted to be affirmed, they weren’t willing to take risks,” she said.

So she had to replant the chapter plant. She felt like she had failed. But she needed to do it in order to find students who were willing to develop their faith. “A lot of my [current] students don’t come in missional, but there is openness to learn, to take risks,” she said.

Shaylen has applied a lesson she learned from one of her coaches: in the world of wins and losses a loss is not necessarily a failure. “Even when we don’t experience the outcome we anticipated, God can use it,” she said. “In his Kingdom, God can use things that fall short of our expectations that still bring him glory. He can work in deeper ways than what we see. I’m in the process of learning that.”

With her athletic background, InterVarsity’s new Athletes InterVarsity ministry would be a natural niche for her. A former teammate recently told Shaylen how much she appreciated how Shaylen lived out her faith during their time together, and how it helped her get through some of her own challenges. “So many of the gifts that we have been given in InterVarsity would be a blessing to the athletic community,” she said.

Shaylen has an undeniable passion for athletics, but right now she has an even deeper passion for student communities that are underserved by ministry. The students at MSU are reaping the benefits of her commitment to serve them.