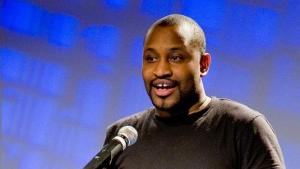 Jonathan Walton loves New York City. He calls it a God-given affection—because when he first arrived in the city as a Columbia University freshman, he hated it.

New York City was a big change from his hometown in rural southern Virginia. “The people are loud,” he remembers thinking. “There’s no reason for this many people to live in one place.”

He admitted he wasn’t prepared for Columbia. What saved him was an invitation from a friend to attend an InterVarsity small group Bible study. “If I hadn’t had people to talk to, I probably would have flunked out,” he said. “InterVarsity definitely kept me in college.”

Jonathan had won a scholarship to Columbia on the basis of his already-published work as a poet. Eventually he started to win attention as a speaker and performer in New York City, and while the attention was exciting, the constant self-promotion was deceptive. God was calling him to something more through InterVarsity, where he saw people who followed Jesus instead of their ego. God emphatically got his attention during the summer after his sophomore year.

Everything came crashing down all at once. He lost his job. There were money problems, and a check bounced. He didn’t have a place to stay. He didn’t know where to turn. Finally he had a long conversation with his InterVarsity staff worker, Ashley Byrd.

“I was trying to figure out why a guy like Ashley would care about a guy like me. And he said, ‘Because Jesus cares.’” Jonathan renewed his commitment to follow Jesus and became more involved in InterVarsity when the school year started. His last two years at Columbia he was the chapter’s Large Group Coordinator.

“When I came on staff I really didn’t have a grasp of what urban projects were, but what I did have was a conviction that students should be loving the people on their campuses so that it causes them to push out to the boundaries of the entire world,” Jonathan said.

Greg Jao, InterVarsity’s National Field Director for the Northeast, admired the way Jonathan tied justice advocacy with Scripture study and prayer at NYCUP. “We believe this generation of activists will burn out and become embittered—like prior generations of activists—if they aren’t renewed regularly by the Holy Spirit’s work and presence,” Greg said. “Jonathan models this in the way he lives, teaches, and directs the project. He’s an activist because he’s a faithful disciple of Jesus.”

Instead of focusing primarily on spring break and summer vacation programs, like other urban projects, Jonathan began a year-round program that offers students the opportunity to live out their faith by feeding the homeless, as well as fighting human trafficking and modern slavery.

“His regular one-day programs (Feed 500) have been key places for Christian students to invite non-Christian students to meet a God who cares about personal and social righteousness,” Greg noted. “He has created long-term relationships between non-Christian service organizations and InterVarsity chapters. I love the way NYCUP not only reflects InterVarsity’s convictions about Scripture, justice, spiritual formation, and mission but also actively advances our campus work.”

The number of students involved in NYCUP has grown steadily. Jonathan believes students are looking for tangible ways to express their faith and make a difference in the world. “Christians are the only people on campus who have a vision for what God intended and how He will restore it,” Jonathan said.

Reaching Out to the City

Jonathan now has the additional responsibility of being the official spokesman for Price of Life New York City, a call to faith and justice that culminates in a series of events in early October, 2013. InterVarsity and dozens of collaborating organizations will be inviting students attending 18 targeted New York City colleges to participate. “I expect this to be a catalyst for ministry and city renewal if we are obedient in our calling to be bold and unashamed,” he said.

Through the Price of Life it’s hoped at least 10,000 students will be personally invited to follow Jesus and fight human trafficking. It will be one of InterVarsity’s largest evangelistic outreaches ever. But Jonathan is already thinking ahead. “Maybe in five years we will be in a position to reach 594,000 people—the total number of students in New York City,” he said. “In the long term, yes I think we can do it.”

For Jonathan, nothing less would serve the city that he loves. Because it’s a city that God loves.

Jonathan Walton and his wife Priscilla are mentioned in this article on Christianity in New York City.

In the video below, he talks further about his ministry with InterVarsity.