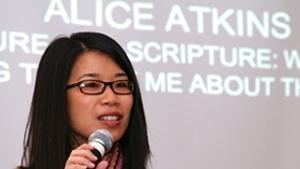 InterVarsity Christian Fellowship has been working with Hmong college students in Wisconsin since 2000. Most of the Hmong in the U.S. are refugees from Laos who came to this country after being allies with the U.S. during the Vietnam War. They make up 38 percent of the Asian Americans in Wisconsin and are the largest growing non-White population on college campuses.

Alice Atkins, Area Director for Wisconsin Southeast, believes that God has called her to Wisconsin to serve Hmong college students. She remembers one particular day when she and other InterVarsity staff were discussing faith and religion at UW—Parkside in Kenosha, Wisconsin. While they were there, Alice met a Hmong female student who was a nominal shamanist, so Alice started asking her about her shamanistic beliefs.

Shamanism is an ancient religion in Hmong culture that focuses on interacting and encountering the spirit world. “Our Western culture is post-Enlightenment,” Alice explained. “When we hear ‘evil spirits,’ we tend to respond with, ‘Shhhh, don’t talk about those strange kind of miracles.’ We would rather talk about apologetics. We’re too busy tamping down the transcendental, suppressing the supernatural for fear that we might be seen as irrational.”

As her conversation with the Kenosha student continued, Alice asked, “Do you know that Jesus cast out evil spirits in the Bible?” Turning to Alice the student replied, “Oh, really? I have a lot of Christian friends and nobody’s ever told me that!” Alice wondered how our view of Scripture would be deepened and enriched if we invited Hmong shamanists to read the Gospel of Mark.

The Gospel and Hmong Culture

Alice and the other InterVarsity staff she supervises (who also work with Hmong students) have been thinking of new ways to share the gospel so that it makes sense in a Hmong context.

“The way that we’ve explained the gospel to our Hmong students is that Jesus is Lord of all—not just personal salvation, social justice, etc., but also of the spiritual realm,” said Alice. “Jesus is making everything right in the spiritual realm as well as all other parts of the world.”

The Growth God Has Brought

It’s been exciting for Alice and other staff to see how God has grown the ministry to Hmong students across the nation. Today there are nine campuses with InterVarsity Hmong ministries, and 130 Hmong students attended the recent Hmong Christian Collegiate Conference (HC3). Over the next five years, Alice and her team are asking God to spread InterVarsity’s Hmong ministry to 20 campuses, and to bring 250 participants to the next HC3 Conference.

While the growth in the breadth of the ministry has been exciting, growth in individual students has especially inspired Alice and her team. Hmong student leaders, in particular, have been an incredible blessing in the ways they have stepped up and made incredible sacrifices for the sake of their Hmong brothers and sisters, that they too may know the hope that Jesus Christ offers.

In many instances Hmong students have started an Asian American Bible study on their campus from nothing. “They’ve also sacrificed their time and finances to love their fellow students and to be cultural informants as they sometimes start out as the only ethnic minority in their fellowship,” she said.

Alice is excited to be bringing two Hmong interns on staff with InterVarsity this year and is looking for ways to empower these important Southeast Asian staff in the InterVarsity movement as a whole.

“It has been a privilege to work with such students and staff, and we are seeing God bringing Hmong shamanistic students to himself,” said Alice. “Students are taking their faith more seriously, and God is transforming the campus through Hmong students. The growth in Hmong ministry has been exciting, and we hope to be able to grow into more campuses where Hmong students are transformed by the gospel.”