Sharing a Vision for Campus Ministry 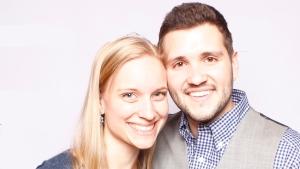 Both Kyle and Danielle VanEtten entered their respective colleges with career visions that included the possibility of becoming a missionary in some far-off land. They were both invited to get involved in InterVarsity, Kyle at the University of New Hampshire (UNH) and Danielle at Smith College. They both learned how to lead small group Bible studies and share their faith.

Kyle ended up leading the UNH chapter as a junior, when the chapter was without a staff minister for a year. By that time he already knew he wanted to apply for InterVarsity staff. As for Danielle, “When it came time to think about what to do after college, and I realized InterVarsity staff was an option, it seemed like a dream job.”

Kyle and Danielle met at Toah Nipi, InterVarsity’s Retreat and Training Center in New Hampshire, at the New Staff Training day that preceded their Regional Staff Conference. Danielle was impressed by Kyle’s vision for campus ministry. Kyle remembers thinking that Danielle was tall.

They became friends and started dating about a month later, as Kyle became a campus intern at the University of Connecticut (UConn) and Danielle began planting an Athletes InterVarsity chapter at Smith. They continued dating and got engaged as Danielle temporarily left InterVarsity to become a Fulbright Scholar and teach English in Brazil for nine months. They got married ten days after she returned from Brazil, and settled in Connecticut.

Kyle and Danielle say a shared vision for ministry—of seeing students become lifelong disciples of Jesus—is one of the strongest bonds of their marriage, since their InterVarsity jobs are quite different. Their experiences as InterVarsity students were also somewhat different.

As a high school senior, Kyle was encouraged by friends to check into InterVarsity when he got to UNH, so he made contact with a staff worker before he arrived. He was invited to Summit Week, a retreat at Toah Nipi the week before classes started. He had attended family camp at Toah Nipi as a child, so he was familiar with the venue and the events of the week held up to his expectations. “After that retreat I was pretty much sold on being a part of InterVarsity in my time in college,” he said.

Danielle also connected with Smith Christian Fellowship (as it was called) right away but didn’t discover its affiliation with InterVarsity until her junior year. And because she was on the crew team with a heavy schedule of practices and regattas, she missed just about every InterVarsity conference that she might have attended.

A variety of skills are needed for campus ministry to thrive. Kyle likes to teach and disciple students; building the chapter at UConn is his main goal. He’s also nurturing a chapter replant at the University of Hartford.

Danielle likes to talk with strangers and invite them to activities. Four years ago she started planting a chapter at Eastern Connecticut State University. Now she’s leading chapter plants at Eastern plus four other area community colleges. “All of these other campuses came from open doors, her natural gifting as a planter, and God making a way for her to make connections,” Kyle said.

Danielle finds it ironic that on community college campuses, community seems to be the thing that students hunger for the most, and is so hard to find. “Students really don’t know each other,” she said. “When we go around to invite them to join us for a Bible study, a lot of times they just say yes because they are eager to get to know other students on campus.” Even though it may be comparatively easy to get students to sit down for a Bible study, coordinating meeting times with students as they balance classes, jobs, and families is challenging.

At the UConn campus, Kyle works with a chapter of about 60 students. “The thing that has made the biggest difference in my career on staff has been learning to develop student leaders and empower student leaders in their callings on campus,” he said. Val Gordon, now InterVarsity’s Program Management/Strategic Planning Officer, coached him and helped him identify that developing a team of trained student leaders to partner with him would be his most effective ministry.

The wisdom of that decision grows more and more evident with each passing year. “It’s really cool to see the “world changers developed” part of InterVarsity’s Vision Statement come out of that,” Kyle said. “And more than that on campus to see students owning the vision, owning the mission, and recruiting their friends.”

Last summer Kyle and Danielle bought a house in Hartford to extend their ministry by living in intentional community. Their new home opens up opportunities to minister to students after they graduate, as well as host meetings of their ministry teams, ministry partners, and church groups. As they visit in the home, current students have an opportunity to see modeled ways that they can continue to live lives of mission after they graduate. Three of the four people who live with them right now are InterVarsity alumni or current students.

Kyle and Danielle are eager to see campus ministry grow in central and eastern Connecticut. There are 17 colleges in the area but only four staff. They are looking for partners who will share their vision of reaching all 17 campuses with the gospel message. To donate towards helping to spread the gospel to more campuses in Connecticut, follow this link.