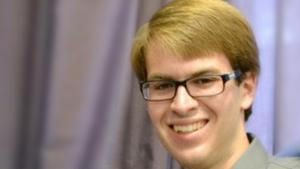 Even though he grew up in a Christian home, Kevin was concerned about  his lack of confidence. “I was afraid to challenge the status quo, afraid to take risks," he said. "Missions, service, evangelism, and other Christian duties sounded great to me in theory, but I never really put myself into situations because I didn’t believe God could use me to do anything—maybe someone else, but not myself. This is something that changed significantly in college and in InterVarsity.”

Now as he finishes his senior year and prepares to graduate from the University of California–Santa Barbara, Kevin reflected on how InterVarsity shaped his Christian faith in college. “I have much more confidence in my spiritual authority to share the gospel and be a world changer," he said.

It started with Freshman Bible Study

During his freshman year, Kevin started attending a dorm Bible study as well as InterVarsity’s weekly large group meetings. Not only did he make a significant number of friends in those first few months in InterVarsity, but he also connected with one of his InterVarsity staff workers, Paul, who began mentoring him.

One of the unexpected challenges that Paul gave Kevin was to go on a global project to Bosnia the summer following his freshman year.

“Going to Bosnia was definitely stepping out of my comfort zone big time,” says Kevin. “Giving up control and going to a place where there are few Christians, and sharing the gospel with them . . . was difficult.”

After returning to UCSB, Kevin experienced leadership for the first time as a Bible study leader on campus. He learned to do everything from leading Scripture study to discipling another member of the Bible study. He also grew in his dependence on God to cause spiritual fruit to grow and transform the lives of the college students in his Bible study.

Kevin not only continued to lead Bible study his junior year of college—where he saw amazing community built and one student become a follower of Jesus—but he also developed a friendship with one of his biochemistry professors who is also a Christian; this professor has become an important mentor to Kevin.

“[He] started a book club and discussion group open to anyone from his biochemistry lecture, where we read The Language of God by Francis Collins,” says Kevin. “As many as 30 students have attended this discussion group, [and] most of them [are] from secular backgrounds and identify as agnostic or atheist.”

Partnering with his professor during his senior year as Kevin also mentors and disciples other InterVarsity Bible study leaders has been an invaluable part of his continued discipleship as a leader in his InterVarsity chapter. Together, Kevin and his professor are focusing particularly on building friendships with students in the discussion group, while also looking for opportunities to share their faith.

“I believe that God has equipped me to be his servant wherever I go,” remarks Kevin. “If I go into academic or industrial biomedical science, I can be a witness of his love there. If I’m displaced into another culture or situation that I’m not used to, I know that God is there just as much as he is in other situations where I am comfortable. God has prepared me to serve him, whether times are good or bad.”