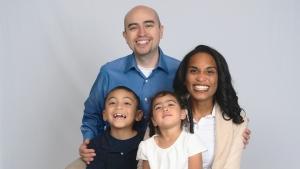 The atheists on the other side of the room at New York University (NYU) were not happy when the Christians sang their worship songs. And that was the beginning of Mickey Sanchez’s journey to becoming an InterVarsity Campus Staff Minister.

“NYU put us in the same room together, with just a little dividing wall between us,” he recalled. “We bothered them when we did worship. We didn’t know they were there.”

The Christians turned down their music when they realized what was happening, and the two groups continued to meet in the same large room, as assigned. Later, Mickey crossed the dividing wall to talk with the atheists. He was curious to know why they believed what they believed. They shared back and forth, and the atheists invited Mickey back the following week.

At the same time Mickey was struggling with his biochemistry lab work. It was more tedious than he expected. “From that point on, I realized I was much more interested in having conversations with atheists than running DNA trials,” he said.

As the philosophical discussions continued, Mickey switched his major to political science, a field that he perceived as applied philosophy. After graduation he found a job at the New York City Council office but stayed connected with the Christian fellowship and the atheists’ club at NYU because he wanted to continue the conversations. “Eventually I realized I should be doing ministry and not politics, if that’s where all my energy is,” he said. Both he and his wife decided to go to seminary.

Seminary took them to Boston and it was there, while on staff at a church, that several people told him he would be a good fit for InterVarsity’s campus ministry. The opportunity to lead an Alpha course with veteran InterVarsity Campus Minister Jeff Barneson in the Harvard Business School, during which two people in the class were baptized and two others came to faith, clinched it.

“I saw that as God’s confirmation that I should be doing campus ministry,” he said. As Mickey joined InterVarsity staff at Harvard and began to work with the various Graduate School fellowships, he discovered each school had a different culture. When it came to Bible study, for instance, there were similar passions but varying applications.

“In the Business School they didn’t spend a lot of time analyzing the text,” he noted. “They went straight to application. In the PhD world they analyzed the text most of the time and probably didn’t get to the application enough.”

Mickey expected to stay at Harvard long term, but after just four years there his wife landed a job at the national office of the Evangelical Covenant Church in Chicago. So three years ago he began working with the graduate students at Northwestern University.

Instead of overseeing several different chapters and having a fellowship of InterVarsity staff to work with, Mickey is now staffing one single grad chapter that numbers over 50 students. But like at Harvard, InterVarsity grad student ministry has a long history at Northwestern. They had been praying for a staff minister for a number of years. Mickey is pleased that the group has a missional focus to reach every corner of the graduate school campus.

Adjusting to the Midwest after living on the east coast for most of his life has been easier than he expected. He’s been working on getting acquainted with other groups of Northwestern graduate students, building connections, and finding ways to cosponsor events with them.

Recently, one of the chapter’s small group leaders bumped into a huddle of students in the Physics Department, who were talking about Graduate Christian Fellowship. They were complimenting the fellowship’s activities, in particular a dialogue that had been held with the Queer Pride group.

“What we’re doing here at Northwestern is creating bridges for people to consider the gospel,” Mickey said. “We’re trying to remove obstacles that are unnecessary. Our dream of reaching every corner of the campus is starting to happen.”

From biochemistry to politics to campus ministry, it took a few turns before Mickey found his calling. As InterVarsity embraces the 2030 Calling to reach out to every corner of every campus, he is looking forward to seeing how ministry to graduate students and faculty can lead the way.