Starting a Movement on HBCU Campuses 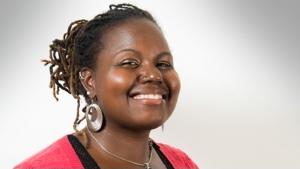 Tamice Spencer was hired to plant an InterVarsity chapter at Clark Atlanta University, one of the four Historically Black Colleges and Universities (HBCUs) that make up the Atlanta University Center (AUC) Consortium. New on campus in 2013, she found two students to prayer walk with her to pray for the new ministry.

Almost immediately they met a student from Morehouse College who had been praying that God would send a ministry to students there. The new chapter was soon made up of both Clark and Morehouse students, and later the small chapter at Spelman College joined them. Today, Tamice reports, there are about 50 students in one unified AUC chapter with campus-specific small groups.

But that’s not all. Within the last two years, AUC students have joined Tamice in planting new chapters at Alabama State University and then Savannah State University. “The AUC community has a heart for championing an InterVarsit-chapter-type community at other HBCUs,” Tamice said. “HBCU students are actually planting other HBCUs, which is a great feeling for me as a staff.”

When Tamice first encountered InterVarsity as a freshman at Virginia Commonwealth University (VCU), she wasn’t interested in Christianity. She had other interests. But then, after an injury at a nightclub that needed surgery to fix, a near drug overdose, and an HIV scare, she realized her life was headed in the wrong direction.

“I had everything that could possibly go wrong in my life happen during my freshman year in college,” she said. “When I was trying to figure out how to start my life over again, InterVarsity was the first place I looked.” InterVarsity students had been praying for her. She put her trust in Jesus, and soon became involved in chapter leadership.

But VCU is not an HBCU. As an InterVarsity Campus Staff Minister, it took awhile for Tamice to realize that the chapters she’s planting on HBCU campuses can be successful even if they do not have hundreds of participants, as chapters at VCU and some other schools do.

HBCU students are high-identity Black students, and the groups they can be involved in are tailor-made for them. A missional campus ministry like InterVarsity is different, and its value is not immediately apparent. “I learned to see one student as a win,” Tamice said. “That was revolutionary for my thinking and the way I do ministry. As that started to change, I saw the ministry grow.”

Given that HBCUs present unique challenges for InterVarsity, Tamice is pleasantly surprised at the passion her students have to see InterVarsity chapters planted on other HBCU campuses. InterVarsity HBCU students have discovered something that their fellow students don’t realize they are missing.

In Tamice’s experience, HBCU students are frequently either “de-churched” or “dichotomized,” or perhaps both. They went to church growing up at home, or maybe with their grandmother, but they don’t see Christian faith as relevant or credible on campus. Or they see Christian faith as something they still do on Sunday morning but it’s not relevant to their daily lives or their career choices.

“A lot of what we try to do on campus is remove the false dichotomy,” Tamice said. “God can infiltrate everything we do. We can be a Black studies major and love God at the same time and those things are not mutually exclusive. That’s probably the biggest challenge for students—realizing that they can be unapologetically Black and unapologetically Christian at the same time. I don’t think a lot of them realize that they can walk wholly in both of those things. Because they are certainly learning that they can be unapologetically Black at an HBCU. But the Christian part usually falls by the wayside or becomes a sort of secret identity.”

Tamice has seen it take a year for a student to integrate their faith in God into their lives. “Once they get it, it’s contagious,” she said. “They become more excited about faith. I’m also seeing that they become better students and become better stewards of things on campus.”

Several times each semester the InterVarsity students set up Proxe Stations on campus, artistic displays designed to create spiritual discussions. The most popular Proxe is the one that asks students, “What would you say if you could ask God anything?” What students usually want explained are the tragedies in their lives that seem to negate God’s goodness—questions of theodicy.

“Some barriers are intellectual, but a lot of them are visceral,” Tamice said. That’s a contrast to the perceptions that many people may have of Black Millennials. “[Christians] think about praying for perceived violence in the Black community, not for students who want to know why their father died,” she explained. She’s found that before there can be a conversation with students about conversion, there has to be an honest conversation about pain and suffering.

Tamice is ready to have those conversations. She loves her job and she wants to reach out to more campuses. “There are 21 HBCUs in Georgia and Alabama, and I want all of them,” she said, with a laugh. Starting with her home church, Mt. Lebanon Baptist Church in Chesapeake, Virginia, she has launched a campaign called “Adopt an HBC Near U,” inviting churches to partner with InterVarsity in campus ministry.

“Students can become strong leaders in these congregations, but local churches need to begin to see how an integrated faith is necessary for students to grow and become mature believers,” she said.

She’s already well on her way to achieving her goal.

“Planting five of the 21 campuses in just three years has been amazing,” she said. “I can see that God is really moving.”